Home » Soil » Soils that stand the test of time » The permafrost 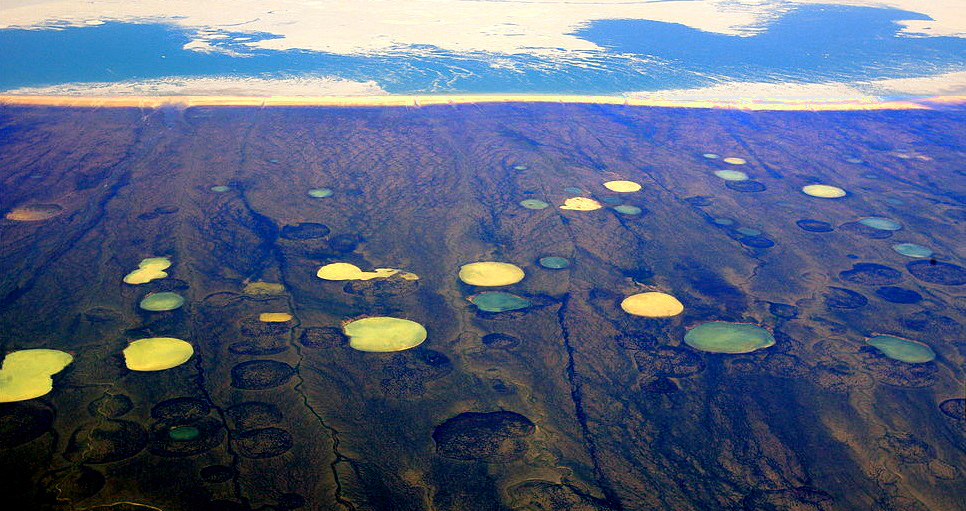 Permafrost is present on the Earth’s surface, particularly in the Northern Hemisphere. Its thickness and continuity depend on latitude and altitude. There are two main categories of permafrost: a thick, continuous permafrost that occupies the large areas of the continental shelves of Alaska, Canada and Siberia; and a thinner, often discontinuous or even sporadic permafrost, which concerns mountain ranges, particularly the alpine ranges. In these, rocky glaciers constitute a remarkable form, whose genesis and behaviour are the subject of special studies, different from those traditionally carried out on “real” glaciers. This article also discusses the risks associated with mountain permafrost in the context of climate change.

1. Definition and distribution of permafrost

The concept of permafrost (English name) or pergelisol (French name) was first defined in 1947 [1] and has since been an important part of cryospheric studies.

Permafrost is a thermal and temporal phenomenon that refers to subsurface terrain whose temperature never rises above 0°C for at least one year. It can affect all types of materials: bedrock, surface formations, soils. It may or may not contain ice: in rock, the amount of ice is generally limited to filling cracks, while in surface formations it may be important: fill the entire interstitial space (saturated permafrost), include small layers or lenses of ice, and exceed the proportion of rock material (supersaturated permafrost) by volume.

Permafrost represents about 20% of the Earth’s continental surface, or 25 million km2, a quarter of the land area of the Northern Hemisphere. By way of comparison, continental ice (excluding sea ice) covers 16 million km2.

Depending on the proportion of the total area covered by permafrost, a distinction is usually made, depending on latitude (or altitude):

While most permafrost occurs at high latitudes, it is also found at high altitudes in mountainous areas. Thus in the Alps, a discontinuous permafrost is potentially present above about 2500 m in a northerly direction, a more continuous permafrost above 3500 to 4000 m. According to model calculations, permafrost could cover an area of 1300 km² in the French Alps [2], more than twice the surface area of glaciers (about 500 km²).

2. Structure of the permafrost

The formation, persistence or disappearance of permafrost depends very closely on the climate. Its distribution, temperature and thickness respond to changes in the natural environment and anthropogenic disturbances, resulting in a change in the ground’s thermal regime. The vertical structure of permafrost, in particular its ice content, is dependent on both climate and topographic, geological and geomorphological conditions (Figure 2).

On the typical thermal profile, three levels are clearly visible:

The layer that never thaws is the permafrost in the strict sense. Below the level at which the maximum and minimum temperature curves meet (Tmin and Tmax) the terrain does not undergo annual oscillations in air temperature. This maximum penetration depth of annual variations is highly dependent on ice content. It can be as short as a few metres in ice-rich terrain, and as long as 20 to 30 metres in rocky terrain in the Alps.

The depth of the permafrost base is determined by the mean local air temperature, which conditions the permafrost air temperature, and by the geothermal gradient: the deepest permafrost thus corresponds to the coldest and driest climates (low snowfall shortens the insulating effect provided by snow). For example, the permafrost is several hundred metres deep in the far north of Canada or in Siberia. In the Alps, drilling carried out between 1998 and 2010 has shown that at an altitude of 3000 metres, permafrost can reach a thickness of more than 100 metres.

The interaction between the climate above the ground and the climate below its surface is complex and depends on multiple factors, many of which are sensitive to climate change. Thermal oscillations in the atmosphere are generally damped with depth due to the thermal conductivity of the subsoil and the snow cover. There is generally a time lag between changes in ground surface temperature and changes in depth in permafrost; in the case of a thick permafrost (North America, Siberia…), this lag can be in the order of hundreds to thousands of years, in that of a thin permafrost (Alps,…), it is counted in years or decades.

Any type of land is likely to be affected by permafrost, whether it is bedrock or sediment.

In the case of a rocky massif, we will be dealing with a rock that is more or less fractured and “cemented” by ice. The proportion of ice is limited to crack filling and may be almost nil in the case of a poorly fractured rock, but it can play a significant role in the stability of rock masses.

In the case of surface formations, permafrost is likely to be formed from rock debris (colluvium, moraine and scree) and ice (from snow compaction and avalanche flows and infiltration water freezing). The conditions under which this permafrost can form depend on the altitude (generally higher than 2500 metres in our temperate latitudes), the exposure and the geomorphological context (presence of glacier; presence of coarse detrital deposits acting as thermal insulation, or even as a cold trap, for the ground) and topography (shading effect, cold air bowl, etc.).

The standard structure of a permafrost in surface formations is composed of:

The proportion of ice in the ice concrete layer is a determining factor in geomorphological dynamics. If this concrete is saturated or supersaturated with ice, permafrost is likely to flow by creep on the slopes, which allows it to be found at lower altitudes, particularly in forms called rock glaciers, which are very numerous in the French Alps, from Mercantour to Vanoise.

Rock glaciers are among the most relevant indicators of permafrost, as they are clearly visible in the mountain landscape, and are remarkable both for their extent and their variable response to climate fluctuations. They occur particularly in relatively dry areas where glaciers cannot fully develop. Rock glaciers acquire their very particular morphology (Figure 3), made up of nested bulges and a steep front, by creeping the mixture of rock debris and ice on a sloping substrate.

The presence or absence of rock glaciers, their morphology and functioning depend on the variable balance between the supply of rock debris and ice, which in turn are conditioned at the regional level by the climatic and geological context and, at a more local level, by the topo-climatic and geomorphological context [3].

The diversity of situations observed shows that most of the rock glaciers have a periglacial origin (i.e., the ice comes from burying snow under debris and freezing deep water), which does not exclude the presence of glacial ice (formed initially at the surface by the compaction of a neve). Finally, it should be noted that, regardless of the origin of the ice, only permafrost thermal conditions will allow the development and maintenance of a rocky glacier.

Rock glaciers, developed at varying rates depending on Quaternary climates, flow on the slopes and fill the high valleys, displacing considerable masses of material. Like glaciers, which are made up entirely of ice, rocky glaciers are subject to the vagaries of the climate in the medium and long term and leave obvious traces in the landscape. While glacial moraines are small in size, often dismantled by glacial meltwater, rocky glaciers remain in place and now spread their tongues up to 1500 metres above sea level in the Alps. However, only the highest of them, and therefore the most recent, still contain ice and may be in motion. It is generally accepted that the “activity” limit altitude of these rock glaciers (between 2500 and 3000 metres in the Alps) roughly corresponds to the lower limit of the discontinuous permafrost. A possible permafrost found at a lower altitude will be described as “sporadic” or in “isolated spots”. It can only correspond to very specific morphological and thermal situations, for example those linked to cold drafts in porous or karstified systems [4] : “cold scree”, “ice boxes” identified for example in the pre-Alpine mountains of the Chartreuse and Vercors.

4. Risks related to the merger of permafrost

Just as glaciers are retreating, alpine permafrost is responding to climate change that has been underway for several decades. First, its temperature rises to and approaches 0°C in many alpine sites. At the same time, the active layer, this surface portion that thaws in summer, thickens and the rheology of the frozen levels in the ground changes significantly. In the end, the lower limits of the alpine permafrost are expected to gradually increase in altitude.

It is the evolution of this margin (roughly located between 2300 and 3200 metres above sea level in our latitudes), which is out of balance with the climate, that raises major questions in terms of hazards and associated risks. Indeed, the degradation of permafrost could play a significant role in the upsurge of gravity, periglacial and torrential phenomena, due to the loss of the cohesive role of ice in stabilizing the upper slopes.

The consequences of permafrost warming that could affect our territories are of four kinds:

[4] with open cracks and dissolution cavities, as can be found in limestone rocks 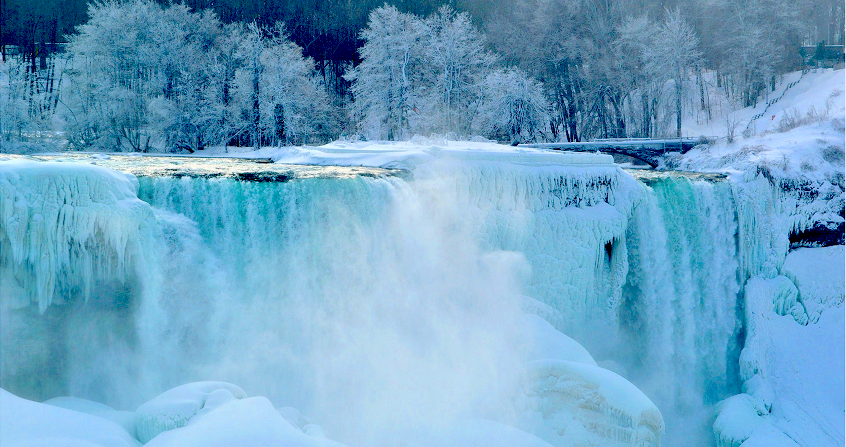 The impact of climate change on snow cover and Alpine glaciers: consequences on water resources

The Alpine Rhône illustrates how global warming could influence river flow, not only through changes… 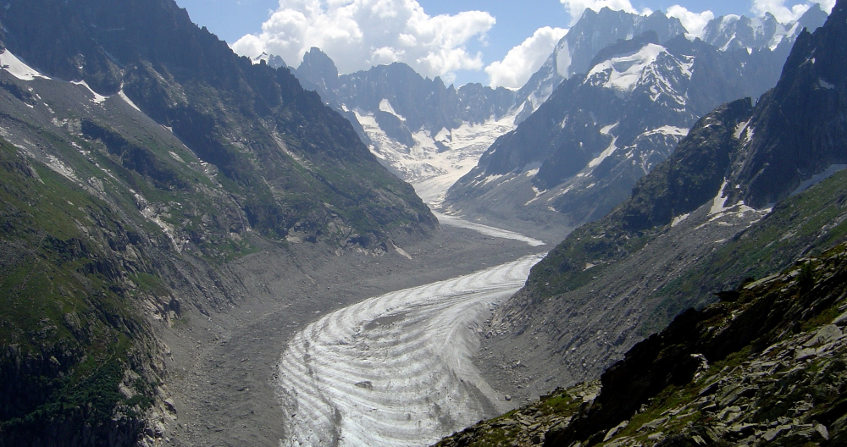 As true icons of mountain regions, glaciers are major tools for detecting climate change. However,…