How to study the organic molecules of comets?

There are four ways to study the organic molecules of comets. The oldest is to study spectrally, from Earth, the atmosphere and the tail of comets. Simple organic molecules have been identified for several decades. The second, chronologically speaking, was to bring back dust from a comet to Earth. This was done in 2006, and a speck of dust from comet Wild 2 revealed the presence of glycine, the simplest of amino acids [1]. The third method, the in situ study, was one of the goals of the Rosetta mission [2] and in particular of the robot Philae which should have landed on the comet Churyumov-Gerasimenko in November 2014. The landing was “half failed”, and Philae could only analyze the most volatile of the organic molecules escaping from the ground, without having been able to analyze the soil itself. Philae has nevertheless identified sixteen carbonaceous molecules, some of which are precursors of amino acid synthesis. But during close overflights, particularly during the flight of 28 March 2015 less than 15 km from the surface of the comet’s nucleus, or during the emission of violent puffs of gas and dust in July 2015 just before the transition to perihelion, the Rosina mass spectrometer of the Rosetta orbiter [2] formally identified glycine.

List of formally identified molecules and their respective proportions to best explain the data of the Philae lander COSAC instrument, an instrument that combines a gas chromatograph and a mass spectrometer. Adapted from Goesmann et al [3] 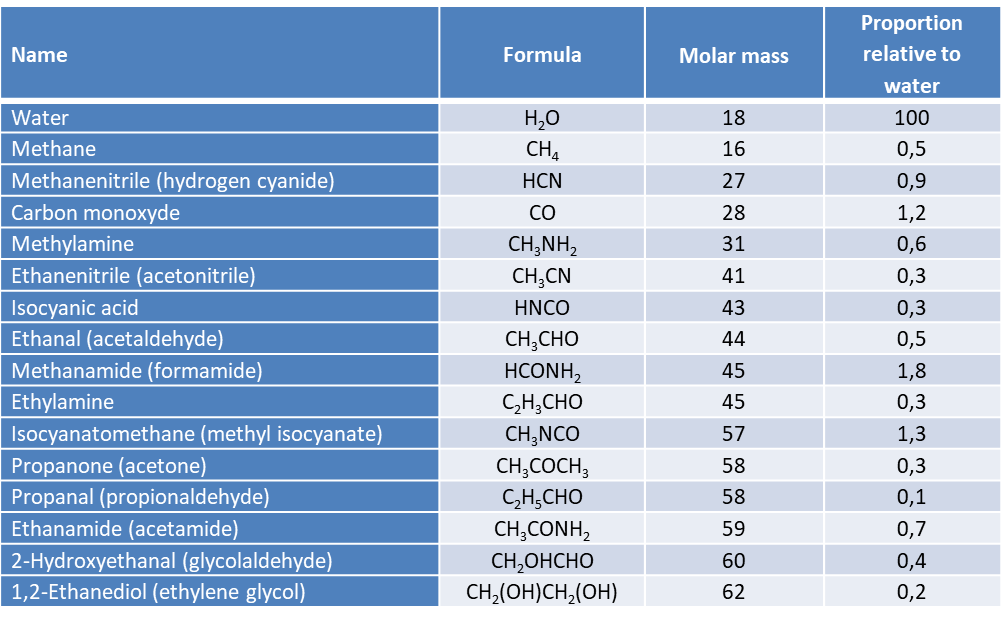 The last method consists in making an “artificial comet”. How? It is necessary (1) to mix ice of water, methane, carbon monoxide, methanol…, (2) to put this mixture under the conditions of temperature and pressure of space, and (3) to irradiate it with UV and energetic particles in order to simulate the solar radiation and wind, cosmic rays. A result published in April 2016 is extremely interesting: an international team, but mainly French, has thus synthesized ribose and other related sugars [6]. This result is crucial, because if we knew in meteorites almost all the organic molecules (or their precursors) necessary for the origin of life, we had never found either ribose or ribose precursor. However, ribose seems essential to terrestrial life…

[2] Rosetta carries a suite of eleven instruments aboard the orbiter and a landing gear, Philae, equipped with ten additional instruments that will perform surface measurements.