Bats and the emergence of coronaviruses

1. Most known coronaviruses come from bats

China occupies a central place for the spread of coronaviruses. Indeed, it is a vast country whose varied climates give rise to a great diversity of bats and viruses (Table). In addition, bats are in close contact with a large human population, which potentially promotes the transmission of viruses to humans and farm animals.

In the case of the SARS outbreak in 2002 – 2003, the masked palm civet and the raccoon dog (Nyctereutes procyonoides) were identified as the animals that transmitted the coronavirus (SARS-CoV-1) to humans. It was only much later that researchers discovered that this coronavirus originated from bat hosts belonging to species of the genus Rhinolophus, including Rhinolophus sinicus, R. ferrumequinum, R. affinis, R. macrotis, R. monoceros, R. pearsoni and R. pusillus (Figure 1). The geographical origin of these viruses has even been traced to a remote cave in Yunnan Province in south-western China.

Table. Bat coronaviruses, some of which are the cause of species responsible for recent epidemics. 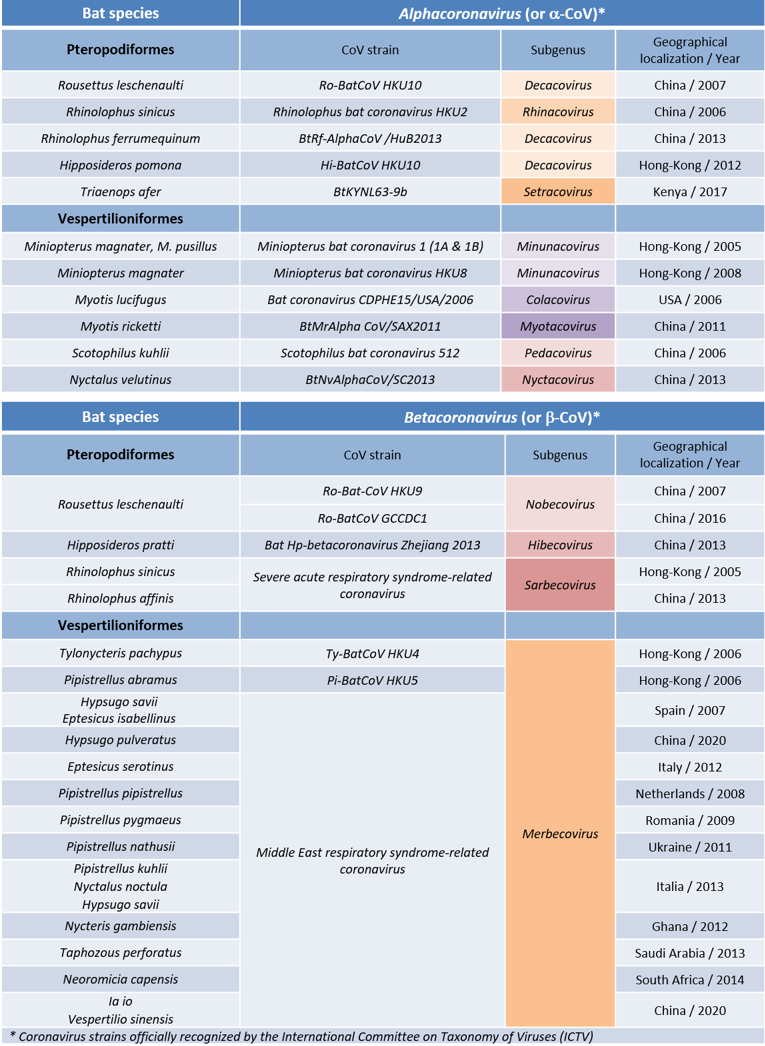 Masked palm civets and raccoon dogs thus acted as intermediate hosts between bats and humans in transmission. Since the virus test was negative in civets living in the wild, it is likely that the human activities of raising civets, selling them at markets and eating them in restaurants were responsible for the contamination between wild animals and humans.

2. Where did the COVID-19 outbreak start?

At the beginning of the COVID-19 epidemic, it was a market that attracted the attention of the health authorities, the market from Huanan to Wuhan, which, supposedly offering only seafood, was in fact clandestinely selling a multitude of live wild animals. The market was quickly closed down and barred from access, preventing any further investigation. However, the few samples that could be taken showed the presence of SARS-CoV-2 in the immediate market environment (contact surfaces, soil and waste water) and not in the animals intended for sale. Therefore, it had to be admitted that the market (Figure 2) was not the cause of the epidemic, it would simply have acted as an amplifier of viral transmissions by concentrating humans, some of whom were already contaminated [1].

Patient zero is yet to be found. Will we ever know him? If the disease is officially dated at the end of December 2019, analyses show that there will be patients in the Wuhan region as early as March 2019! In France, cases of COVID-19 could have already been present in mid-November 2019. We come to think that the first infection of a human being probably goes back several years. Studies have shown that viral transfers between wildlife and humans are much more frequent than previously thought and often go unnoticed. In the case of COVID-19, this is probably a single animal-to-human transmission event that was successful some time ago.

3. Origin of the SARS-CoV-2 coronavirus?

This raises the question of the origin of the new SARS-CoV-2 coronavirus (Figure 3) [2]. Obtained in record time, the viral genome sequence could be compared with those of three coronavirus genomes isolated from bats:

Even if this percentage of homology seems high, we cannot confuse the two coronaviruses BatCoV RaTG13 and SARS-CoV-2, which certainly had a common ancestor whose separation is estimated to have occurred 40 to 70 years ago [5]. Recently, by reanalyzing the genome of a coronavirus called Ro-BatCoV HKU9 isolated in 2011 from a Leschenault’s rousette (Rousettus leschenaulti) from the Guangdong region, the researchers were challenged by the fact that by recombining the two viruses RaTG13 and HKU9, a virus very similar to SARS-CoV-2 was released [6]. It is not impossible that rousettes and horseshoe bats living in the same caves in southern China could have exchanged their coronaviruses, which in turn shared sequences of their genomes to produce a recombinant virus similar to SARS-CoV-2.

However, one mystery remains: how did SARS-CoV-2 end up in Wuhan in Hubei Province, which is far removed from the aforementioned provinces in southern China? This mystery is all the more complicated because the viral surveillance campaigns carried out in recent years among Hubei bats have not been able to isolate viruses related to SARS-CoV.

4. What were the circumstances of transmission of the pathogenic coronavirus to humans?

Contamination may have occurred directly during hunting activities involving bats. Hunters enter the caves and can contaminate themselves through contact with the faeces and aerosols generated by them. Contamination may also occur during the handling or transport of bat corpses, or during the cutting up of the bushmeat. However, while large fruit bats are a very popular dish, this does not seem to be the case for horseshoe bats who are too small to make a suitable meal. However, this cannot be ruled out.

The hypothesis of direct transmission of the virus to humans has been supported by seroprevalence studies that have shown the presence of bat coronavirus antibodies in the blood of a significant percentage of people living in rural areas of southern China. These results suggest that exchanges of coronavirus do take place between the inhabitants and bats grouped in colonies in caves near villages [7].

In the end, the passage of the virus through one or more intermediate hosts remains the scenario favoured by researchers. At the beginning of the epidemic, pangolin was claimed to have played the role of intermediate host, but this hypothesis tends to be increasingly rejected. Nevertheless, Malaysian pangolins seized by Chinese customs in 2019 did provide a coronavirus with an amino acid sequence of the receptor binding domain (RBD) to the human ACE2 receptor that closely resembles that of the RBD of SARS-CoV-2 [8]. This raises the question of the link between pangolins and bats. Pangolins are very solitary animals and are severely weakened by coronaviruses. It may be necessary to accept the simple hypothesis that these intensely trafficked animals may have been contaminated by other wild animals or by traffickers while being kept (Figure 4), transported or sold on Chinese markets [9].

Feeding directly on bat corpses could be done by small carnivorous animals such as the Masked palm civet or the raccoon dog, already known as SARS-CoV-1 carriers, but also Asian badgers (Meles leucurus) and Chinese ferret-badgers (Melogale moschata). Haven’t we dismissed an obvious suspect, the masked palm civet [3] (Figure 5)? The Chinese are very fond of this animal and it has long been intensively farmed and had to be brought under control since the SARS epidemic in 2002. What about the measures taken for the current farms? We have little information.

Among other potential intermediate hosts, classical farm animals such as pigs, chickens and ducks were considered but no virus circulation was observed in them. However, pets such as cats, ferrets and dogs have shown varying degrees of susceptibility to SARS-CoV-2. It is therefore not convincing to consider that they could have played the role of intermediary, especially since the owner of the animal seems to have been the source of its contamination in each case [10].

In conclusion, there is a great deal of speculation about the origin of SARS-CoV-2 at this time. It should be remembered that it took 15 years to identify the bat virus that caused the SARS epidemic in 2002. It is highly likely that future discoveries will confirm the role of bats in the origin of COVID-19 [11]. However, it must be understood that these links between bats and viruses are not new; they may be very old. Just because this relationship has just emerged to our knowledge does not mean that it poses a greater threat now than it did before.

Thanks to François Moutou and photographer Louis-Marie Préau (www.louismariepreau.com) for their contributions to this article.