Plasmodium falciparum, a parasite derived from an algae 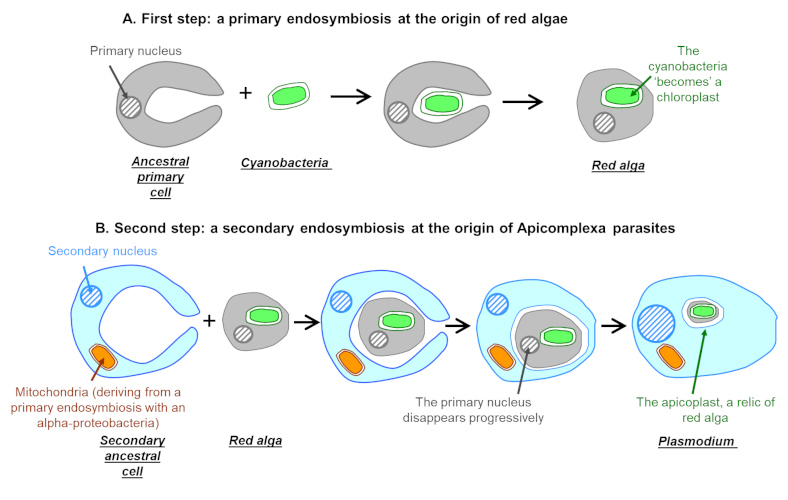 More than two decades ago, the researchers were surprised to discover inside the cells of the malaria-causing agent, Plasmodium, a structure that until then had only been known in plants and algae: a plastid [1],[2]. However, this one is not green, it does not contain chlorophyll. What major event in Evolution could have caused a chloroplast to become one of the components of Plasmodium cells? Let us go back to evolution: evolution: cells with a nucleus (called eukaryotic cells) contain simple organelles, mitochondria and chloroplasts, formed during a process of endosymbiosis called “primary” (see Symbiosis and evolution). Systematic genome analysis shows that a single primary endosymbiosis is at the origin of all “primary” chloroplasts: when a cell has “swallowed” an ancestral cyanobacterium, possibly mixed with other microbes. Figure A shows how red algae was built. Current biochemical and structural data indicate that the two membranes that limited the ancestral cyanobacteria were likely at the origin of the two membranes in the chloroplast envelope. Then a new endosymbiosis – called “secondary” – occurred, which saw an alga “swallowed” by a so-called secondary eukaryotic host (Figure B). A cell is then formed nesting the algae, like a Russian doll. Then the ingested alga was reduced to the point of leaving only a plastid surrounded by 4 visible membranes. The Plasmodium plastid – called apicoplast – is the result of one of these events, and molecular data show that it is derived from red algae. Endosymbiosis has benefited both nested cells and has been maintained throughout the evolution. To the point that the metabolic links within the ancestor of Plasmodium have been consolidated and that this association has become inseparable. To conclude this marriage, important regions of DNA from the nucleus and plastid of the red algae migrated to the nucleus of the secondary host. As a result of this process of cellular inclusion and DNA incorporation, Plasmodium contains in its nuclear genome hundreds of genes that code for proteins originating from the red algae initially ingested. As for the apicoplast, it is a fossil relic of this red algae.