Home » Soil » Soils that stand the test of time » Soil erosion: a story of fluid and grains 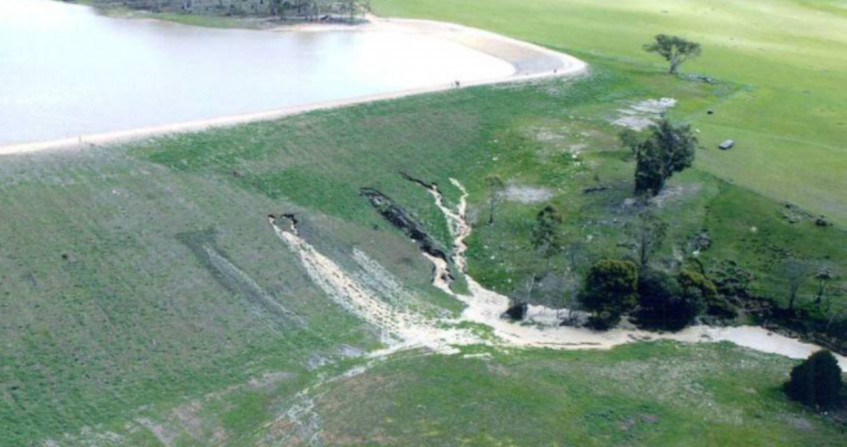 No material is so hard that it can withstand the onslaught of time without eroding. Water and wind patiently sculpt all the obstacles that stand in their way, whether natural or man-made. The issue of soil erosion by surface or deep water flow is addressed here through the problem of the resistance of embankment dikes and dams to water infiltration or water flow on their surface. A typology of the different possible erosion mechanisms is proposed. The characterization of the resistance properties of a soil to erosion is then evoked, as well as some design rules to curb erosion. The concepts discussed in this article are illustrated by examples of disorders observed on real structures, as well as by laboratory and field experiments, and by numerical simulations.

Water and wind shape our landscapes. On large scales, water falls as precipitation, the intensity of which can destructure the soil and wash it away by runoff. The water then forms torrents and rivers which, by transporting huge quantities of sediment, incise the landscape by creating valleys. Along the coastline, the repeated onslaught of waves changes the coastline as storms roll in. In gusts of wind, the wind moves dunes and raises clouds of dust that sometimes redeposit several thousand kilometres away (the sand of the Sahara, for example, is capable of crossing the Atlantic).

On a smaller scale, soil erosion is a matter of fluids (air or water) and grains, because soil can be seen as a granular material composed of grains in more or less complex interactions between them (Read: How matter deforms: fluids and solids). A flow exerts mechanical stresses on these grains and can, if sufficiently intense, destructure the soil, which then loses material and is carried away by the flow.

By building dikes and dams, man has been able to control the impact of water on his environment more and more effectively. Although today we often think of them as concrete structures, most of the existing dikes and dams are made of fill, i.e. compacted earth. These structures protect us, for example, from the onslaught of floods and storms, but they can also guarantee us a resource of water (drinking or irrigation water) and energy. Like all human constructions, they are not indestructible and are also subject to erosion. In this article, we propose to present the issue of soil erosion from the particular angle of erosion of dikes and dams (Figure 1). In this sense, the article is not intended to be exhaustive and does not address many issues such as soil desertification or the erosion of agricultural land [1]. It nevertheless presents soil erosion mechanisms that are far from being specific to dikes and dams alone, as well as the strategies developed to study them and limit their effects.

2. Different modes of erosion of dikes and dams

At the scale of a structure, erosion under the effect of a water flow can be classified into two main families of phenomena. If the water erodes the visible parts of the structure, it is called external erosion. Conversely, if water erodes invisible parts of the structure or its foundation, it is called internal erosion [2]. It should be noted, and we will come back to this a little later, that the terms “external” and “internal” refer to the structure and not to the material. At the scale of the material, erosion occurs either on the surface of the material or directly in its volume, depending on the situation.

Internal and external erosion are responsible for about 50% and 45% of embankment dam failures, respectively, according to worldwide statistics [3]. However, the conditions of their occurrence, as well as their speed of development and their consequences in terms of the embrittlement of the structures they affect are still largely open questions, and much research is currently being carried out on the subject. In the current state of knowledge, it is therefore not possible to justify by calculation the resistance of an embankment dam in the event of uncontrolled overflow of the reservoir, even if experience shows that the dam can resist provided that the overflow does not last too long.

With regard to internal erosion, the work carried out over the last fifteen years or so has led to a classification, widely shared in the scientific community, into four mechanisms [4]. A distinction is made between regressive erosion, conduit erosion, contact erosion and suffusion.

The mechanisms of internal erosion, which nevertheless take place hidden from view below the soil surface, are now well identified. The same cannot be said of external erosion, certainly because its typology is more varied and the fluid flows considered are often very turbulent. To date, no classification of external erosion has been stabilised. However, overflow, shoreline erosion, local scouring and wave erosion can be mentioned as examples (Figure 5). Note that the names given in this article are personal and will be updated depending on upcoming research results.

The erodability of a soil results from the application of a flow that is too intense in relation to the mechanical resistance characteristics of a material. The term erodability contains two pieces of information which refer on the one hand to the initiation of erosion and on the other hand to its kinetics once erosion has started.

In the case where an interface between a solid and a fluid domain can be distinguished, and the fluid flows parallel to this interface, the erosion can be characterized as surface erosion at the material scale. The intensity of the flow is then characterized by the shear stress exerted by the fluid at this interface. The resistance of a soil to flow is characterized by the cohesion of the material as well as by its volume weight. This leads to the writing of a criterion for the initiation of erosion by comparing driving forces and resistant forces. The kinetics of erosion then results on the one hand from spatial fluctuations in the mechanical properties of the soil and on the other hand from spatio-temporal fluctuations in the fluid stresses at the interface, the latter being partly due to turbulence.

The situation described above (Figure 6) involves a two-phase geometry with a well-identified solid domain and fluid domain. It allows to describe some external erosion mechanisms but also the piping erosion mechanism (among the four internal eriosion mechanisms) which can be seen by looking at the local scale as surface erosion (at the edges of the conduit), and to a lesser extent the case of contact erosion with parallel flow at the interface. On the other hand, the other internal erosion mechanisms (backward  erosion, contact erosion with flow perpendicular to the interface and suffusion) involve flows in the volume and need to be analysed in more detail by considering the individual balance of the elementary soil grains.

A few laboratory tests exist today to characterize the erodability of a material, both in terms of the occurrence of the phenomenon (from which flow intensity) and the kinetics (at which speed a material erodes). These tests include the HET [8] (Hole Erosion Test) (Figure 7) adapted to the study of pipe erosion, the JET [9] (Jet Erosion Test) and the EFA [10] (Erosion Function Apparatus) adapted to the study of external erosion, or the suffusion permeameter adapted to the study of internal suffusion erosion. The interpretation of the first three devices is based on a surface erosion model (other models exist [11]) based on two parameters: an erosion coefficient (characterising the erosion kinetics) and a critical fluid stress (characterising the erosion initiation). The interpretation of the suffusion test is still missing of a well-established theoretical framework and remains, for the time being, a trial for research purposes only.

With the development of numerical computational tools, and in particular the rise of discrete element [12] methods (DEM) coupled with fluid flow resolution methods, it is now possible to address the issue of soil erosion directly at the microscopic scale (that of the grains constituting the material) (Figure 8). At this scale, we no longer really talk about erosion but about the detachment, transport and deposition/clogging of grains. A lot of research is now being carried out to link this very local vision with the engineer’s more global vision at the scale of the structure. The results of this small-scale work serve to clarify the erosion laws observed on a larger scale.

4. Some good practices to limit internal and external erosion

Knowledge of the various internal erosion mechanisms makes it possible to devise strategies to limit the action of water on the soil. These require the formulation of a certain number of “good conduct” rules. For dams and dikes, these rules, called recommendations, are written by the profession within national and international committees. These include the French Committee on Dams and Reservoirs (CFBR [15]) and the International Commission on Large Dams (ICOLD [16]).

Feedback teaches us that it is much easier to prevent than to heal because, once erosion has started, it is difficult to stop it before the structure concerned breaks. For example, the emblematic failure of the Teton Dam [17] in the United States in 1976 occurred only a few hours after the first leaks were detected and despite desperate attempts to repair it.

5. What future for dam and dyke protection technology?

Today a typology of soil erosion by water flow exists with regard to internal erosion (regressive erosion, conduit erosion, contact erosion and suffusion). On the other hand, the classification of external erosion mechanisms is still under discussion by the profession and the four mechanisms presented in this article should be considered only as a first basis for reflection.

A number of construction techniques are used to limit as much as possible the action of water on erodible soil. These techniques are based on the current state of scientific knowledge, which has not yet been completely stabilised. The understanding of the physics of erosion certainly remains a widely open problem and a very active field of research.


The different erosion mechanisms discussed in this paper are presented in relation to the behaviour of embankment dams and dykes, but they can be transposed to other situations involving natural materials (i.e. not modified by man) such as, for example, oil extraction where sand can be extracted by suffusion or backward erosion (Figure 9) at the same time as the oil (referred to as “sand production”), or the failure by erosion of natural dams resulting from landslides across watercourses.

As for the geomorphological erosion mentioned in the introduction, this is the result of a wider range of phenomena with visible consequences over much longer periods of time. The erosion mechanisms mentioned in this article are of course involved in the shaping of landscapes, but we could add to them landslides, various chemical alterations, freeze/thaw cycles, sediment transport, glacial creep, wind transport, impact of vegetation, etc.

[2] This is still sometimes referred to as the hydraulic fox.

[5] This type of erosion is thus only found in cohesive materials that allow a conduit to exist without collapsing.

[18] Size of the area over which a flow passes from zero velocity to its maximum velocity as shown in Figure 2.

To cite this article: WAUTIER Antoine (2023), Soil erosion: a story of fluid and grains, Encyclopedia of the Environment, [online ISSN 2555-0950] url : https://www.encyclopedie-environnement.org/en/soil/soil-erosion-story-fluid-grains/.