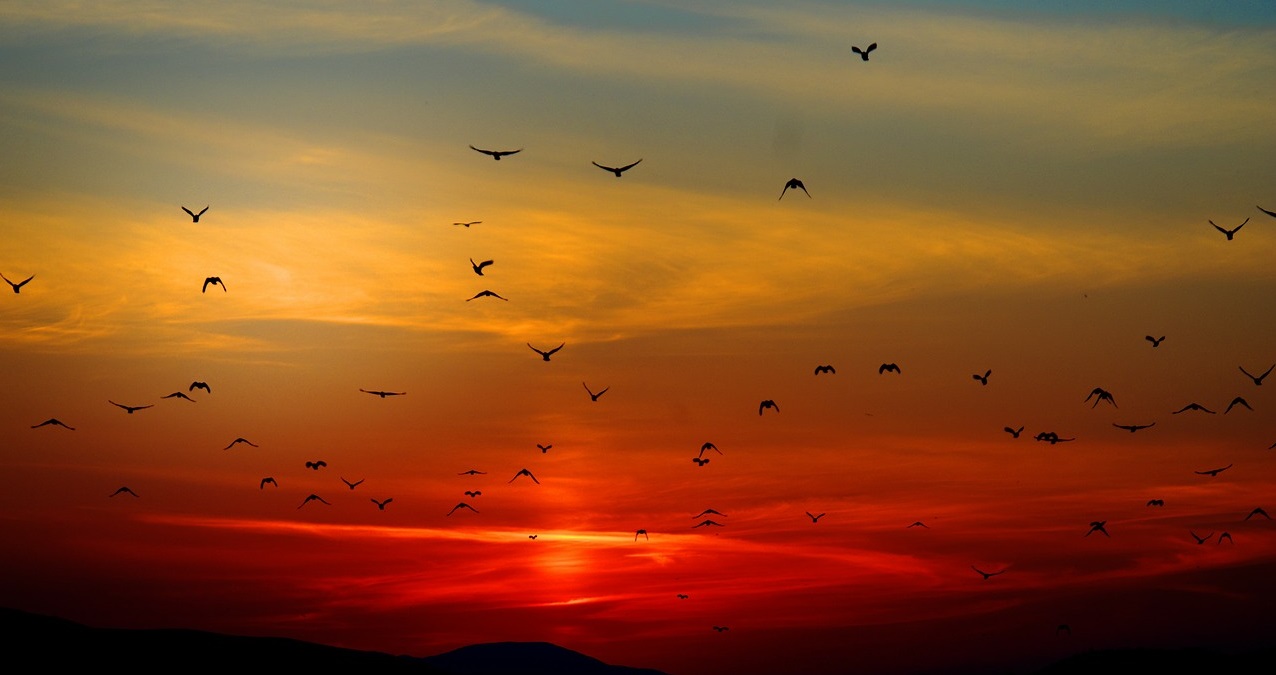 Why is the sky blue, clouds white, grey, or black? Why are the sunsets red? Why is the night black? Where do rainbows come from? These phenomena are largely explained by the interaction, absorption and scattering of light from the Sun with the components of the Earth’s atmosphere: water droplets of various sizes, gas molecules, dust, etc. These mechanisms are at the origin of the different colours of the celestial vault and spectacular phenomena such as Brocken’s spectrum.

1. The nature of light

The Earth’s atmosphere (read the article on The Earth’s Atmosphere and Gaseous Envelope), visible in the header photograph, imposes the colour of the sky and gives rise to surprising light phenomena such as mirages and rainbows. Some phenomena are so familiar to us that we often take them for granted. Why is the sky blue on clear days? Why are the sunsets red? Why is the night black? All these questions seem naive but their answers are not so simple and involve physical phenomena that we will try to clarify. To do this, let us recall the constitution of light and first of all the nature of an electromagnetic wave and its propagation mode.

Light is a superposition of electromagnetic waves. Such a wave includes both an electric field, noted E, and a magnetic field, noted B, oscillating at the same frequency. These two fields are perpendicular to each other and propagate in the third z-direction, orthogonal to their directions, as shown in Figure 1.

The propagation of electromagnetic waves is carried out at a speed, often called celerity, which depends on the considered environment. In vacuum this velocity is c = 3×108 m/s (meter per second). The wavelength λ is the distance between two successive maximums of the fields. At a given point these fields cyclically oscillate with a period T, which is expressed in seconds. The wavelength is the product of this period with the speed: : λ = cT. It is expressed either in metres (m) or in one of its submultiples: micrometers (1 µm = 10-6 m), or nanometers (1 nm =10-9 m), depending on the characteristic scale of the phenomenon. A wave can also be characterized by its frequency ν which is none other than the inverse of the period ν = 1/T and is expressed in hertz (Hz) ; 1 Hz corresponds to a period T = 1s.

The electromagnetic spectrum represents the distribution of all electromagnetic waves according to their wavelength or frequency. This spectrum has a considerable range and varies by 1018 orders of magnitude between the shortest wavelengths, those of γ rays (10-14 m<λ<10-12 m) and the longest, those of radio waves (10-1 m<λ< 104 m), as shown in Figure 2.

The visible domain corresponds to the very narrow part of the spectrum perceptible by our eye, between λ = 0.4 µm for violet light and λ = 0.8 µm for red light (Figure 3). It is in this visible domain that solar radiation reaches its maximum intensity, in the vicinity of λ = 0.5 µm. White light is a superposition of waves of all wavelengths of the visible spectrum.

In fact, light has a double aspect: a wave aspect described above and a corpuscular aspect that manifests itself particularly in the energy exchanges between the Sun and the Earth’s atmosphere. The corpuscles thus brought into play are “energy grains”,or photons. Each photon carries a quantum of energy proportional to the frequency of the electromagnetic wave with which it is associated, and its energy is written E = hν where h is the Planck constant, h = 6.625 10-34 J.s (joule second). So, short-wavelength (high frequency) photons carry more energy than long-wavelength (low frequency) photons. Energy exchanges between solar radiation and the Earth’s atmosphere are discretely carried out by absorption or emission of photons.

2. Interaction of solar radiation with the atmosphere

As it passes through the atmosphere, the radiation (see Solar energies) from the Sun interacts with gaseous molecules and particles (water droplets, dust, aerosols) which are present. Two essential phenomena then occur: absorption and scattering. When radiation is fully or partially absorbed, there is energy transfer between the radiation and the molecules with which it interacts. This results in its attenuation in the direction of propagation. For example, ozone in the stratosphere (see The Earth’s atmosphere and gaseous envelope) absorbs almost all ultraviolet rays, of wavelength less than 0.3 µm, which are very harmful to living species, hence the need to protect this ozone layer.

The oscillating electric field of the incident wave deforms the electronic cloud of atoms. This is the cause of an oscillation of the barycentre (or centre of gravity) of negative charges of the electrons with respect to the positively charged nucleus, which constitutes an oscillating electric dipole, which radiates in all directions and acts as a microscopic transmitting antenna. Figure 4 shows the dipole induced on an atom, but the same mechanism occurs on a molecule.

Note that the wave is re-emitted at the same frequency as the incident wave or that the scattered photons have the same energy as the incident photons. But the intensity of the scattered radiation is inversely proportional to the power 4 of the wavelength of the incident radiation. It is therefore a selective phenomenon that favours the shortest wavelengths of the spectrum (purple, blue). So, since the wavelength of violet light is twice shorter than that of red light, violet light is 16 times more diffused than red light, which explains the blue colour of the sky during the day.

On the other hand, at dawn and dusk, when the Sun is low on the horizon, the thickness of the atmospheric layer crossed by the radiation to reach our eyes is much greater than during the day. The short wavelengths are scattered in all directions, so that the observer looking in the direction of the Sun sees mainly the longest wavelengths, those associated with the red color. This is why the sky appears orange-red in the direction of the setting or rising Sun. Finally, it should be noted that if we observe the sky in the direction of the Sun in broad daylight (which is dangerous), the Sun appears white because we mainly receive a directly transmitted light that is much more intense than the scattered light.

When the size of the particles which are present in the atmosphere is slightly larger or of the same order of magnitude than the wavelength of the radiation, Rayleigh scattering gives way to Mie scattering, whose mechanisms and properties are different. This concerns water droplets, ice crystals, aerosols in the atmosphere (dust, smoke, pollens). This scattering is inversely proportional to the wavelength of the incident radiation, favouring blue but colour but in a much less pronounced way than for Rayleigh scattering. It rather occurs  in the lower layers of the atmosphere, which are the most loaded in aerosol, and gives to the sky colour a faded blue or even greyish appearance (Figure 5).

Then, the different shades of blue taken by the sky depend on the amount of water vapour and dust in the air. As this amount increases, the scattering at all wavelengths is amplified, resulting in an increase in the proportion of green and yellow giving a lighter hue to the blue. On the other hand, the absence of dust and water droplets allows blue radiation to predominate, as can be seen in high mountains.

This scattering occurs when the size of atmospheric particles is much larger than the wavelength of the radiation. It is due in particular to water droplets found in clouds and fogs, which have a size of the order of 100 micrometers. The non-selective scattering then affects all wavelengths (hence its name) which explains the white color of the clouds. The same phenomenon explains the white colour of the snow because the light is scattered by snow crystals of millimeter size. When we see dark clouds, it is because sunlight is absorbed or scattered by other clouds between the Sun and those visible from the ground.

Figure 6 summarizes and maps the different scattering modes of the atmosphere, which directly influence the colour of the sky as a function of the wavelength of the radiation, its angle of incidence and the nature of the scattering particles.

In space, in the absence of atmosphere, the sky appears all black with light sources corresponding to planets, stars and the solar disk. We may also wonder why on Earth surface the night is black. In fact, several phenomena contribute to the darkness of the sky although the latter is not perfectly and uniformly black. The Moon and stars give a poor light on our planet and the phenomena described above exist. This time the explanation comes from our ability to perceive light, and therefore from our retina. It consists of cones and rods. Only the rods are sensitive to weak lights and they do not perceive colours (at night all cats are grey), unlike cones, which are sensitive to colours and are active in brighter light.

Even in the absence of an atmosphere, the sky would not be completely black in an infinite universe uniformly populated by stars, because the superimposed image of all distant stars would produce a uniform background of light. This is what can be observed in the disc formed by our galaxy, the Milky Way, where the density of stars is high. If we consider all the galaxies, the lighting is also not uniform because of another mechanism: the expansion of the universe. The further away the galaxies are, the faster they move away and the more their light is shifted to long wavelengths, i.e. to red and then to infrared, outside our visible spectrum. It is the Doppler effect on light, similar to the mechanism that makes us hear the sound of a vehicle higher or lower as it approaches or moves away from us.

The light on Earth that allows us to observe and often to admire nature comes largely from our star, the Sun. We have seen how the particles, droplets or objects that make up the atmosphere can affect the colours of the sky. This is why the Earth is often called the blue planet, as observed by cosmonauts. They do not see the land and for them the oceans are mirrors that reflect the blue image of the atmosphere, spotted with white or grey clouds.

To cite this article: BELORIZKY Elie (2023), The colours of the sky, Encyclopedia of the Environment, [online ISSN 2555-0950] url : https://www.encyclopedie-environnement.org/en/air-en/colours-sky/.

Variability of solar activity and climate impacts over the last centuries

The primary energy source for the Earth’s surface is the solar energy flux. While the…