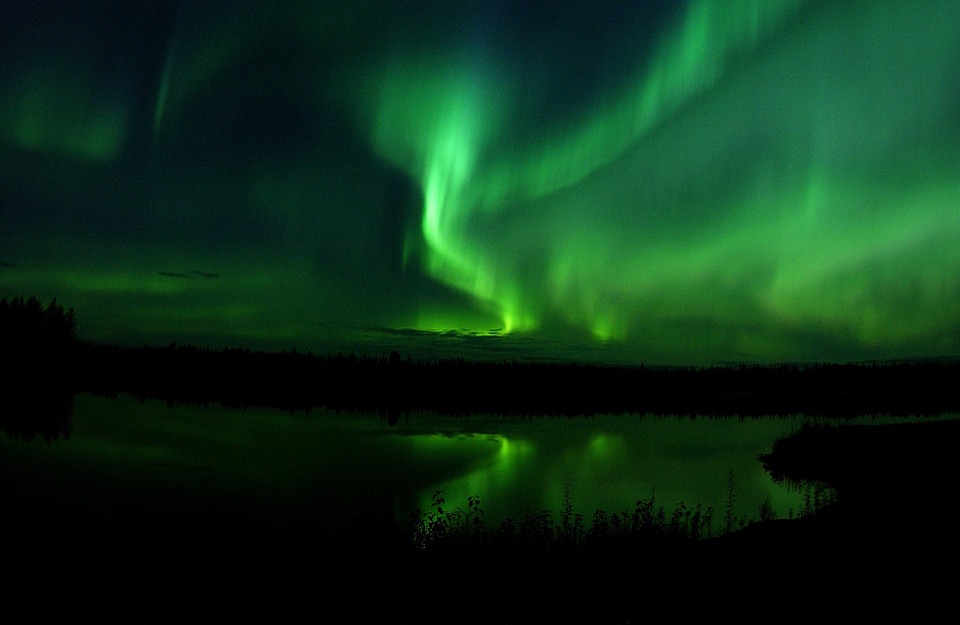 This article should be read in conjunction with The Atmosphere and the Earth’s Gas Envelope. It differs, however, by extending the description of the atmosphere above the meteorological layers to altitudes beyond which each gas component acts as if it was alone. There, ions and electrons mix with the neutral gas, creating a plasma envelope around the Earth.

The atmosphere is often presented as looking like onion skins with little communication with each other (see The Atmosphere and the Earth’s Gas Envelope). This breakdown was established by essentially considering the evolution of the temperature. For the study of space environments (see Space weather and its consequences on Earth), we commonly use another classification [1]. A journey through the atmosphere from the lower layers of the atmosphere (homosphere) to the upper atmosphere (heterosphere), beyond 85 km in altitude.

In the Earth’s atmosphere, dry air is composed mainly of molecular nitrogen (78%) and molecular oxygen (21%). Classical meteorology refers to the area that extends from the Earth’s surface to an average altitude of 12 kilometres (about 17 kilometres at the equator and 8 kilometres at the poles). This layer is referred to as the “troposphere“. The air is constantly stirred, mixing its constituents [2].

The solar energy flux that arrives perpendicular to the Sun at an Astronomical Unit [3] is 1361 watts per square meter (W/m2) (see Solar energies). Considering the sphericity of the Earth, the global average of the energy received on Earth is considered to be four times less (i.e. 340.25 W/m2): 70% of this energy contributes to heating the Earth’s surface, and 30% is reflected or diffused towards space.

What are the physical characteristics of this atmospheric layer? Pressure and density decrease as a function of altitude according to an exponential law (see The atmosphere and the Earth’s gaseous envelope). As we go upward, the temperature decreases linearly in the troposphere, from 6 to 7 degrees per kilometre. The latter value is highly dependent on the relative humidity level of the air.

The laws just mentioned reflect the well-known fact that “hot air, lighter, rises”. As it rises, it cools, the density increases and the air descends (see The Laws of Dynamics) creating convection cells. On the other hand, when the air is warmer at higher altitudes than at lower altitudes, the environment is stable: the cold, heavier air remains at the bottom.

Above the troposphere and up to an altitude of about 50 kilometres, the stratosphere is characterized by the gradual disappearance of water. Solar energy entering directly into the atmosphere – particularly in the ultraviolet – or re-emitted from the ground is no longer used to transform water vapour into droplets. It is used largely to dissociate molecules, in particular ozone (molecules composed of three oxygen atoms) with maximum efficiency around 40 kilometres, and molecular oxygen with maximum efficiency around 20 – 25 kilometres). These dissociations produce heat – they are said to be exothermic – so that the temperature of the stratosphere rises slightly with altitude.

Thanks to its function as an ultraviolet filter, the stratosphere has allowed life to develop on Earth (Read The origin of life as seen by a geologist who loves astronomy). The temperature of the stratosphere increases as you rise, unlike the troposphere immediately below.

The upper limit of the stratosphere, around 50 kilometres, is called the stratopause. Above, we enter the mesosphere. Ozone concentration decreases. Its dissociation, which provided heat, ceases to be a source of heating so that when you go upward, the temperature decreases again. This occurs up to about 85 kilometres away. The mesosphere is a still poorly known part of our Earth’s atmosphere. It is both too high to easily measure its parameters from the ground or to fly sounding balloons, and too low to fly satellites. We know it through, among other things, laser surveys and the study of its own radiation.

In all the “lower” layers we just described, molecules and atoms mix together, giving a homogeneous gas. We can thus speak of an atmospheric temperature, a concentration, terms that apply to the whole atmosphere. This is why, from the ground to 85 kilometres, the atmosphere is referred to as the homosphere. The soil concentration is about 1025 particles per cubic meter, it is 1019 particles/m3 at homopause, its upper limit. The ground pressure is about 1,015 hectopascal (hPa), which is sometimes referred to as atmospheric pressure.

Above the homosphere begins the heterosphere. It is a part of the atmosphere whose properties could only be explored with the advent of radio communications in the twentieth century. Subsequently, sophisticated radar techniques and satellite measurements revealed a complex, dynamic medium, a gas composed of a mixture of electrically charged and other neutral particles. This envelope still raises many questions, in particular about its role in the terrestrial ecosystem (read The biosphere, a major geological player) and in the emergence of life on Earth (read The Origin of Life as seen by a geologist who loves astronomy).

What characterizes the heterosphere is the fact that the concentration of molecules and atoms becomes so low that there is no longer any turbulent mixing between them: the heaviest elements remain in the lower layers, and the lightest “float” above. Each component acts as if it were alone. The perfect gas behaviour (link to Thermodynamics) that prevails in the entire homosphere now applies separately to nitrogen, oxygen and hydrogen. The immediate consequence is a variation in their exponential concentration, but with different decay factors: around 80 kilometres, molecular nitrogen is predominant, ahead of molecular oxygen. Above about 250 kilometres, atomic oxygen is in the majority. Around 1000 kilometres, hydrogen is in turn the most abundant element.

A fundamental characteristic of the heterosphere is to provide a filter for extreme ultraviolet (EUV) radiation (link to “Waves”) [4]. As we have seen, the homosphere effectively filters part of the solar ultraviolet. But, depending on its activity (see Solar Energies), the Sun also emits higher energy radiation, called “Extreme Ultraviolet” and X-ultraviolet (see Blackbody Thermal Radiation). This radiation, if it reached the surface of the Earth, would prevent all life from developing there.

How is it filtered? Through three well-identified processes. The first is ionization: radiation is absorbed by removing a peripheral electron from the atoms and molecules it strikes, creating an electron and an ion. The second is excitation: radiation is absorbed by vibrating, rotating the atom, or by driving away one of its electrons from the nucleus. The third possibility is that radiation is absorbed by breaking a molecule into several parts. After a time ranging from one millisecond to more than 100 seconds, the excited particles return to their equilibrium state either by chemical recombination or by spontaneous emission of a photon – possibly in the visible -. Ions and electrons recombine. Atoms can eventually reform molecules. But since the solar flux is permanent, a balance is established between the production (of excited states, ions, electrons) and losses. The upper atmosphere thus prevents the extreme ultraviolet from descending below about 80 kilometres in altitude.

At low altitudes, in the troposphere for example, if a phenomenon such as a thunderstorm flashes creates ions and electrons, they are immediately recombined to give back atoms or molecules, because the atmosphere is dense and they cannot go very far, at most a few millimeters, without hitting a new particle (read Thunderstorms: electricity in the air). Above about 80 kilometres, it is different: the atmosphere is so tenuous that ions and electrons can travel enormous distances, in the order of 10 kilometres to 200 kilometres, before meeting an atom, molecule or other ion.

So here we are in a very different environment from all familiar matter, a mixture of neutral gas, more or less excited, ions and electrons. Such a mixture is called a plasma and in our case, the atmospheric plasma. Neutral gas has been given the name thermosphere. The ionized gas, ions and electrons combined, is the ionosphere. This mixture, which co-exists permanently, is called the upper atmosphere. The upper atmosphere typically begins around 70 km above sea level. It stops when the magnetic field governs alone (see The magnetosphere: under the influence of the Earth and the Sun). It therefore covers part of the homosphere and the entire heterosphere.

Its properties are quite different from those of a conventional gas made up solely of neutral particles, since the movement of charged particles is sensitive to electric and magnetic fields (see Space Weather and its Consequences on Earth). However, the proportion of charged particles remains low compared to that of neutral particles: about one-billionth at an altitude of 100 kilometres, and one-tenth at an altitude of 1,000 kilometres.

The properties of atmospheric plasma are also highly variable. Thus, during the same day, we can witness a doubling of the electron concentration at 400 kilometres and variations of several hundred kelvins in electronic and ionic temperatures. Indeed, the properties of atmospheric plasma depend very closely on solar radiation in the extreme ultraviolet, and therefore on solar activity (see Solar Energies). At 400 kilometres, in a period of quiet Sun, ions and electrons have a temperature that may seem high: about 1,000 kelvins for ions, 1,500 for electrons. But these values are low compared to what they become during particularly active solar events: the temperature of ions can then reach 3,000 kelvins, and that of electrons 9,000 kelvins.