Our Sun is the guarantor of life on Earth. We have known since the 1980s that it is also responsible for a heap of electrical, magnetic and thermal disturbances affecting many technologies as common as our mobile phones, as important as satellites. These disturbances occur in the Earth’s space environment, beyond 70 km from the ground. They can evolve very quickly. To understand these phenomena and better understand them, a discipline was born: space meteorology. A journey into a particularly turbulent world.

Since the mid-twentieth century, we have understood the main lines of the Sun’s internal structure; since the 1990s and the launch of the SOHO satellite, we know that it is a much less placid star than we previously thought. The Sun is responsible for electromagnetic radiation, cosmic radiation and solar wind, both permanent and from eruptive phenomena, all sources of energy that interact with the Earth’s space environment.

The electromagnetic radiation solar sweeps a wide range of wavelengths, from gamma radiation, through ultraviolet and visible light, to radio waves (read The colours of the sky and The thermal radiation of the black body). Table 1 summarizes these wavelengths and associated energies. The Sun is also at the origin of a permanent flow of matter, mainly electrons and protons, elementary electrically charged particles (read Solar energies): it is the solar wind, whose velocity is 200 to 800 kilometers per second (km/s) in quiet periods, but can reach more than 2000 km/s during very active periods (read Solar energies). This wind acquires very occasionally a speed close to that of light: its particles then take the name of cosmic radiation, with energies of several million electron volts, a second source of which is found in the stars of the Galaxy. The name cosmic radiation is confusing and is a historical survival. It is not radiation, but particles. 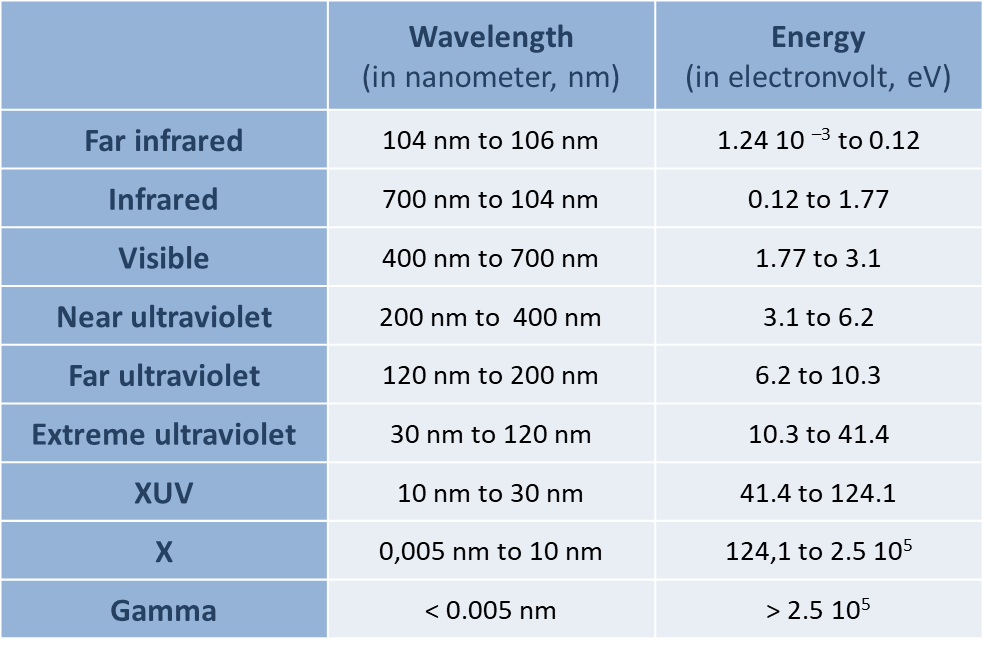 Electromagnetic radiation, cosmic radiation and the permanent or eruptive solar wind are energy sources that interact with the Earth’s space environment…

1. The effect of radiation

In the upper Earth’s atmosphere, typically below 105 km from the ground, the main components are oxygen and nitrogen molecules. Above 200 km and up to 600 km, they are replaced by atomic oxygen, the minority gases being hydrogen, helium, argon and atomic nitrogen. At about 400 km, the total concentration of particles is about a billion billion (1018) per cubic meter and the temperature is about 750°C : it is the thermosphere (read The upper atmosphere). This high temperature is due to the most energetic solar radiation, beyond the ultraviolet (UV). The energies of this radiation (read The thermal radiation of the black body) are such that they are also likely to excite, break molecules or ionize the atmosphere, i. e. to remove at least one electron from target particles.

All these photons, so energetic that they would prevent life from appearing if they reached the lower atmosphere or the ground, are stopped by various phenomena that take place in the thermosphere and absorb their energy. Thus, we have a shield above our heads against this solar radiation.

The part of the atmosphere composed of ions and electrons is called the ionosphere. The temperature of the electrons is about 1100°C around 400 km while the temperature of the ions reaches “only” 800°C at the same altitude in a calm solar period. In fact, this medium is partially ionized, i.e. it is composed of a mixture of neutral gas – essentially molecular nitrogen, molecular or atomic oxygen – ions and electrons. It constitutes a very particular state of matter called plasma, a mixture of a “neutral” fluid and an interacting “electrically charged” fluid.

2. The distant effect of particles

Along the magnetopause, part of the solar wind drifts and enters the magnetospheric cavity on the night side. Another part recombines at a distance of about 30 terrestrial rays, in the reconnection zone. Facing the Sun, direct entries of the solar wind are possible depending on the magnetic state of the Sun and the solar wind. The closer the particles get to our planet, the stronger the geomagnetic field becomes. At a few terrestrial radii (from 5 to 10), it becomes so intense that electrons and ions cannot continue: they are forced to create a ring of electric current around the planet: the Van Allen’s Belt. Then, as the collisions occur, they escape and follow a line of the local magnetic field to finally enter the atmosphere. During transit in and around the magnetosphere, these particles are accelerated to energies of several hundred to several thousand electron volts. To name them, we use the pretty word “precipitation” (meaning ions and electrons), by analogy of course with classical meteorology.

In three spatial dimensions, we prefer to represent the geomagnetic field by shells rather than by lines: the particles do not fill the area between two lines of the magnetic field, but rather the volume between two shells. The base of this volume traces two crowns on the Earth called auroral ovals, typically located between 65° and 75° north and south magnetic latitudes. They exist permanently, because the solar wind blows continuously.

3. The close effect of particles

Precipitations enter the atmosphere between 700 km and about 70 km. Further down, the air becomes too dense for them to continue their journey. They will hit the atmospheric gas, heating it, exciting it, ionizing it. The return to the initial state often occurs through the emission of electromagnetic waves sometimes in the visible range: it is a polar aurora (see Figure 3).

It has been understood since the mid-twentieth century that the Earth’s space environment is sensitive to solar activity [1]. For example, the magnetosphere is the seat of many electrical currents (read The magnetosphere: under the influence of the Earth and the Sun). On the surface of the planet, when the ground is conductive, these currents induce other currents that propagate over long distances. They are slowly variable, almost continuous.  The electrical transformers in our power plants can only manage alternating current: 50 hertz (Hz) in Europe, 60 Hz in the United States for example. The arrival of direct currents causes them to heat up considerably and cause breakdowns. They also accelerate pipeline corrosion by increasing the potential difference with the ground.

Another disturbance is the electromagnetic environment, which causes communication problems at all scales, from cellular phones to ground-to-satellite communications. In addition, atmospheric heating increases friction on satellites, modifying their orbits. They must be corrected, which reduces the life of satellites.

Perhaps more dangerous is the loss of location of interstellar dust, meteors, meteorites, or stages of rockets, dead satellites, pieces of various spacecraft. The expansion of the upper atmosphere under the effect of heating carries this debris with it. It has become necessary to keep them under close surveillance. The risk of loss of a satellite by collision with space debris is currently 0.01%, i.e. one in 10,000 satellites is at risk of being lost in this way. This probability increases exponentially over time. However, in the event of a strong solar disturbance and heating, the debris is carried away by the atmosphere, and it takes several hours to track it down.

The satellites themselves are exposed to the various electrical currents of the magnetosphere, the intensity of which varies with solar activity. These electrical currents degrade solar panels or various instruments mainly by ionizing the coatings. In addition, they can corrupt the programming of on-board computers, which could lead to the loss of the satellite. Outside the magnetosphere, satellites are exposed to the solar wind, which is generally not very aggressive, but becomes so when the sun expels protons of very high energy. Thus, in October 2003, there were about thirty satellite outages, three of which were final.

Solar activity can also have biological consequences, through changes in the DNA of astronauts and aircrew alike. In addition, some have attributed the origin of global warming since the middle of the 20th century to variations in solar activity (see The climate machine and link to “Climate predictions and projections”). In fact, we now know that solar activity can only have regional effects on climate, and in proportions far too small to explain the global change [2].

It is also known that telecommunications and satellite positioning (GPS, Glonass, Galileo…) are affected (see Figure 4). In addition, insurers, banks or tourism companies can benefit from or damage solar activity by imposing protection standards on satellites, or by developing auroral and soon space tourism. Solar activity therefore has consequences for almost the entire world population, and the interests that industry finds in predicting it and quantifying its impacts are, according to studies conducted in the United States and Europe, in billions of euros. The space weather [3], a young discipline devoted to these forecasts, has a bright future.

To cite this article: LILENSTEN Jean (2023), Space weather and its consequences on Earth, Encyclopedia of the Environment, [online ISSN 2555-0950] url : https://www.encyclopedie-environnement.org/en/air-en/space-weather-consequences-earth/.

Variability of solar activity and climate impacts over the last centuries

The primary energy source for the Earth’s surface is the solar energy flux. While the…