Home » Life » Nature under tension » Why is the tiger mosquito so invasive? 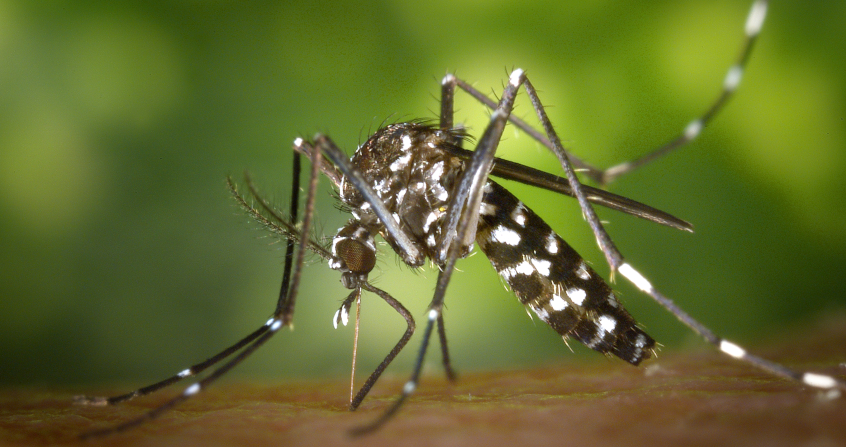 Where do invasive species come from? How are they introduced? Increased trade has led to an explosion in the frequency of introduction of alien insects on a global scale. However, many factors are decisive for the success of a biological invasion, in particular the ecological and genetic characteristics of introduced populations. Indeed, most species introductions fail. Globalization increases the likelihood of introducing an invasion-prone species at the right time and place. Genetic analysis of invasive populations provides valuable information on how introductions and expansion are taking place, both on a global scale and on a local landscape scale.

1. Biology of the species

An invasive species is one whose populations have been transported from one region to another geographically distant region (introduced populations), and which once introduced are capable of reproducing (established populations) and expanding their geographic distribution (invasive populations). The mechanisms at work during this invasion process are independent of the notion of impacts, whether ecological, health or economic. Nevertheless, biological invasions are recognized as one of the main causes of biodiversity change [1].

Among the most invasive species, insects are second after plants, particularly in North America and Europe [2]. Insect invasions can have negative impacts on public health when insects are vectors of infectious diseases (See: Climate change: what effects on our health?). Among them, the Asian tiger mosquito, Aedes albopictus, can transmit various viruses to humans, such as Dengue, Chikungunya and Zika. Originally from Southeast Asia, it is now one of the most widespread mosquito species in the world and is classified as one of the 100 most invasive species [3].

The tiger mosquito life cycle consists of four stages: egg, larva, pupa, and imago (adult), divided into two phases depending on the environment in which the stages occur (Figure 1). The first phase, aquatic, consists of the egg, larva, and pupa stages, with the adult stage being aerial [4]. Both male and female adult mosquitoes feed on nectar, but the females require a blood meal to provide the nutrients needed for egg development. The eggs are laid on a solid surface close to the water surface, and continue to develop once the surface is covered with water. The eggs are drought resistant.

Initially, the tiger mosquito was a forest dwelling species but is now well adapted to peri-urban and rural environments. Larvae can develop in a wide range of sites (Figure 2):

In its Asian native range, the tiger mosquito occurs in a wide range of environments: from tropical areas of Southeast Asia (large Indonesian islands, Malay Peninsula) to temperate regions of Northeast China and Japan, and from subtropical areas of the Indochinese Peninsula to India further west (Figure 3). [5]

Depending on the geographical origin of the populations, it presents a seasonal dynamics abundance. In tropical regions, populations are active throughout the year, whereas climatic conditions in temperate latitudes are unfavourable in winter. Nevertheless, the tiger mosquito has the capacity to lay cold-resistant eggs called diapausing eggs [6].

2. Where do invasive populations come from?

The rate of introduction of alien species has increased significantly in recent decades [2], in particular due to increased trade and transport of goods and people (Figure 4).

Although the majority of invasive insects have a native range in Asia (See: Climate change and globalisation, drivers of insect invasions), introduced populations are not always directly introduced from their native range, but may originate from other introduced populations, the latter being referred to as ‘bridgehead’ populations. The reconstruction of colonisation routes is based on genetic methods and on spatio-temporal data on species detection (occurrences) to describe the routes used: places of departure and arrival, number of stages, type of transport, frequency and number of introductions [7]. This knowledge of how the species is introduced is necessary to prevent new introductions [8].

The rapid growth in global merchandise trade has increased the number of tiger mosquito introductions. Its spread probably began in the late 19th century, but its distribution has rapidly spread to all continents except Antarctica in recent decades, particularly in Europe where the species has been present since the late 1970s [9].

Although each biological invasion has its own history, introductions of other insect species, such as the Asian ladybird [11] and the spotted-wing drosophila [12], have followed a similar geographical pattern. The introduction into Europe has taken place from Asia via bridgehead populations in the United States, suggesting a predominant role of human transport networks.

Since its first introduction in Albania in 1979, the species was introduced a second time in Northern Italy in the early 1990s [9]. Its geographical distribution remained relatively restricted to these regions until the 2000s, then it gradually invaded all parts of Mediterranean Europe in less than 30 years, colonizing increasingly remote areas each year (Figure 5).

The analysis of a representative sample of the distribution of the species in Europe has made it possible to reconstruct the precise history of the expansion. The three populations initially introduced in Europe (Albania, Northern Italy, Central Italy) constituted centres of dispersal (Figure 6). The migration routes reflect the geography of human transport: genetic exchanges correlate to the geopolitical context in the Mediterranean basin.

Multiple introductions are one of the main factors increasing population genetic diversity [15]. They can bring two genetically distinct groups of individuals into contact, whose mixing leads to the appearance of new genetic combinations. For example, the tiger mosquito populations established in central Italy, resulting from mixing between two source populations, have higher levels of genetic diversity than those recorded in the native range of the species [10]. Furthermore, the high connectivity between introduced populations has probably favoured the maintenance of high levels of genetic diversity within populations on the expansion fronts, contributing to the rapid expansion in Europe (Figure 5).

4. A species predisposed to transport and temperate climates

Trade determines the origin of introduced populations and the number of introductions, but cannot explain alone the success of the tiger mosquito. Different elements of its biology and ecology have also played a role in introduction and establishment success.

The adaptation of organisms to human-modified habitats may increase the likelihood of their introduction into new regions because populations in areas frequented by humans are more likely to be transported [16]. Among the breeding sites used by tiger mosquitoes, used tires are the preferred egg-laying site. Because they are drought resistant, the eggs can survive for several months and can be transported over long distances. Intensified tire trade has thus initiated the global expansion of the species through the transport of eggs.

The distribution of tiger mosquitoes in temperate regions corresponds to several thresholds of climatic conditions [17]:

As with many insects, the winter survival of the tiger mosquito in cold environments is primarily determined by the ability of the eggs to enter diapause. This physiological adaptation is already present in temperate regions of Asia, where are the sources of the introduction in Albania and central Italy, and in the USA, which is the source of the introduction in northern Italy [5], [18],[19]. Thus, the tiger mosquito was already pre-adapted to settle in Europe. Moreover, the environmental conditions encountered during introduction in Europe were similar to those encountered in the source regions [20], which may explain the rapid establishment of the populations (Figure 7). These environmental constraints include climatic constraints (temperature, rainfall) but also anthropogenic constraints (urbanisation and artificialisation of habitats).

The intracontinental dispersal of the tiger mosquito after introduction is mainly due to the passive transport of eggs via road transport, particularly used tires [21]. Indeed, numerous detections of tiger mosquitoes have been reported in tire storage areas. However, recent research has highlighted the role of daily car travel in the dispersal of adults [22].

Among the areas recently invaded by the tiger mosquito, the Grenoble region, where it has been present since 2012, is an excellent study area for understanding the expansion dynamics of invasive species. Expansion has only been possible in three directions on either side of Grenoble, corresponding to the three valleys located between the Vercors, Chartreuse and Belledonne massifs (Figure 8).

The tiger mosquito has a low natural dispersal capacity of about 200m per generation on average based on estimations from capture-recapture rates [26]. The generation time [27] is about three weeks in the tiger mosquito. Environmental conditions in the Grenoble region being favourable for reproduction from May to October, the species can theoretically complete up to seven generations per year. Thus, the maximum natural dispersal of individuals between 2013 and 2017 is limited to a radius of 6 km. As the geographical distance between genetically close populations on either side of identified roads (Figure 9) can be up to 25 km, this study confirms that the main factor explaining the connectivity between distant populations in the tiger mosquito is human transport along roads.

6. Rapid natural expansion due to urbanization of the territories

In the Grenoble area, the presence of the tiger mosquito is determined by (Figure 10):

Although often neglected in the context of biological invasions, natural dispersal can also contribute to the expansion of populations at a small spatial scale. A dispersal model combining spatio-temporal detections of the species collected by the Mosquito Control agency in Rhône Alpes (EID) with suitable habitats identified by ecological modelling (Figure 10) and the biological characteristics of the species (number of generations per year, maximum adult dispersal distance per generation), allows to dissociate dispersal events compatible with natural dispersal from those that are necessarily passive (distance too large). By comparing successive years since introduction, this model reveals that between 70% and 80% of new yearly detections can be attributed to natural dispersal (Figure 11). This predominance of natural dispersal corroborates the patterns of population genetic differentiation, with diffuse urban areas such as parks, private gardens and cemeteries, identified as barriers to dispersal (Figure 9). Populations present in diffuse urban areas that are a few hundred metres to two kilometres apart are genetically distant. This low dispersal can be attributed to the fact that diffuse urban areas provide sufficient favourable habitats with a relatively high abundance of egg-laying and host sites (for feeding and breeding) and vegetative areas (for adult resting).

The large proportion of continuous suitable habitats for the tiger mosquito in the Grenoble region promoted the rapid colonisation of almost all residential areas a few years after its introduction. Human population growth and the attractiveness of residential areas on the edges of dense urban areas gradually induced an extension of urban residential spaces and a replacement of open habitats, such as meadows or farmland, providing new suitable habitats for the establishment and expansion of the tiger mosquito. Changes in land use and human pressures on ecosystems promote the establishment and accelerate the expansion of invasive species (See When invasive plants also walk in the fields).

[6] Diapause is a temporary cessation of development, optional or mandatory, and generally determined by environmental conditions (temperature and photoperiod).

[23] Average distance travelled between birth and reproduction of an individual. Natural dispersal depends on the ability of individuals of a species to move in a given environment, whereas passive dispersal involves human intervention in the movement of individuals.

To cite this article: SHERPA Stéphanie (2023), Why is the tiger mosquito so invasive?, Encyclopedia of the Environment, [online ISSN 2555-0950] url : https://www.encyclopedie-environnement.org/en/life/why-tiger-mosquito-invasive/. 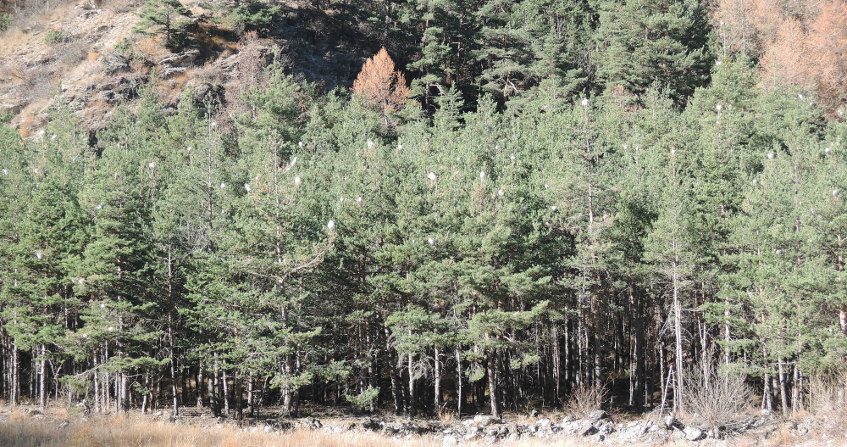