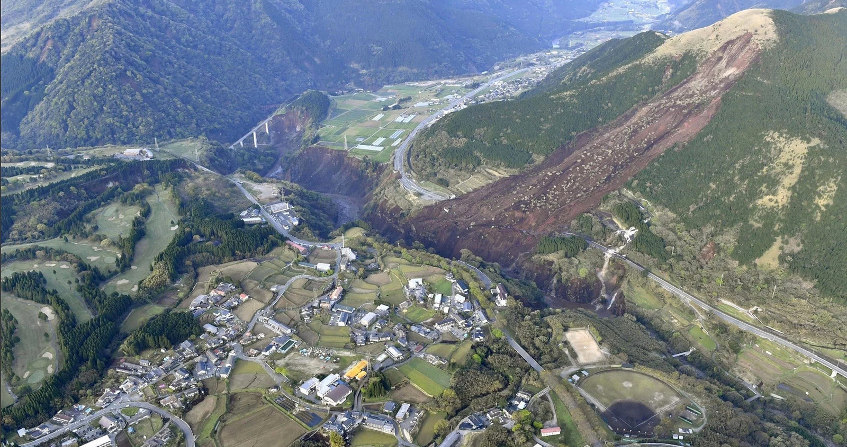 1. Can all earthquakes trigger ground movements?

2. What are the characteristics of these ground movements?

Earthquakes generally trigger superficial ground movements. However, the volume of instability can sometimes reach several million m3, as was the case during the earthquake of 31 May 1970 in Peru: the rock avalanche of Nevado Huascaran [6], with an estimated volume of 50 million cubic metres of rock, ice and snow, covered an exceptional distance of more than 16.5 km, at an estimated speed of 210-280 km/h. This rocky avalanche killed 20,000 people in the villages of Ranrahirca and Yungay in the valley [7].

The “intensity” of earthquake-initiated ground movements can be characterized by:

3. What is the impact of these movements on people and territories?

Sometimes debris from ground movements blocks the bed of rivers and forms natural dams. This leads to the formation of dam lakes upstream of ground movements. This type of phenomenon occurred in large numbers (several hundred) during the earthquake of May 12, 2008 in China. This animation [11] shows a slope before and after the onset of a ground movement by the 2008 earthquake.

Similar phenomena also occurred during the 14 November 2016 earthquake in New Zealand as shown in Figure 4. According to the New Zealand Centre for Geological Hazards Studies [12], the earthquake of 14 November 2016 and its aftershocks triggered between 80,000 and 100,000 ground movements and led to the formation of about 150 natural dams. As the lifespan of these dams varies greatly (from a few minutes to several hundred years), the bodies in charge of preventing natural disasters must answer two major questions:

4. How do we explain these instabilities?

To decide on the state of stability or not of a slope, one must compare:

During an earthquake, several phenomena can occur and contribute to the onset of instability.

Figure 5 below shows that at a given point on the Earth’s surface, the movements recorded during an earthquake depend on three parameters:

4.2. The decrease in the mechanical characteristics of materials

4.3. The increase in pore pressures

When the compression waves emitted by earthquakes propagate in loosely compacted soils, they tend to compress the soils. When these soils are saturated with water, water occupies all the pores (or interstices) between the soil grains. In response to soil compression, the pressure of water in soil pores increases and water seeks to escape from the soil generally to the surface. However, when the earthquake is rapid, large enough or repeated over time in front of the time needed to drain the soil, water cannot escape from the soil. The higher the water pressure in the soil, the lower the mechanical strength of the soil and the more likely it is that the slope will break.

5. What methods can be used to assess slope stability in earthquakes?

When considering slope stability in earthquakes, two questions in particular should be addressed:

Few scientific studies to date have focused on the characterization of instability in terms of propagation speed and distance, given the complexity of the phenomena involved.

Whatever the cause of the instability, the study of the stability of a slope involves several steps:

From the above parameters, calculation software can be used to determine whether a slope is stable or unstable, by comparing the driving forces that tend to destabilize the slope with the resistant forces that oppose movement. This defines the static safety coefficient of the slope. When this coefficient is greater than 1 (in the case of a slope in which the resistant forces are greater than the driving forces), the slope is stable. When it is less than 1, the slope is unstable. The closer this coefficient is to 1 (e.g. in the case of a slope that has suffered many earthquakes in the past), the more an earthquake, even of moderate magnitude, can trigger a rupture in the slope.

There are three types of methods.

Disadvantage of the method: This method does not provide information on the probability of slope failure or on the “intensity” of movements induced by the earthquake. It is therefore advisable to limit its use to a preliminary analysis of the stability of a slope during an earthquake, in an area where there are few human or material challenges.

The second type of method is the “method for calculating permanent displacements” introduced by Newmark in 1965 [18] (Figure 9). It consists in evaluating the displacements likely to occur in a ground movement represented by a rigid block sliding on a supporting ground under the effect of an earthquake represented by an accelerogram [19]. The displacement of the unstable block is obtained by a mathematical operation: all acceleration peaks that exceed a “critical acceleration” value defined as the acceleration leading to a pseudo-static safety coefficient equal to 1 are integrated twice in time (Figure 9). Once this displacement has been calculated, an expert judgment can be made to determine whether or not the slope material can withstand such a displacement without a total failure of the slope.

Disadvantages of the method:

The third type of method includes stress-strain  methods whose use is strongly recommended for studies of specific sites where human and/or material stakes are high and where data quality is sufficient. These methods consist in evaluating the displacements induced by a given earthquake in a slope using two- or three-dimensional calculation software that integrates all the complexity of the sites (presence of different materials, morphology of the terrain, etc.) and earthquakes. Figure 10 below shows an example of a numerical simulation of the progressive failure of a slope due to repeated loading by several earthquakes over time.

6. What are the current challenges in research on earthquake-induced ground movements?

The study of earthquake-initiated ground movements is now the subject of much research aimed at improving relative knowledge:

Field observations have also shown that earthquakes can also have long-term effects on slope stability: in the years following the 21 September 1999 earthquake in Taiwan, for example, there was an increase in the number of ground movements triggered by monsoon episodes [22]. The latter is explained by the fact that the earthquake weakened the slopes, making them more susceptible to instability during the subsequent episodes of heavy rainfall.

Cover image. A ground movement that occurred in the city of Minamiaso, Japan, following the April 2016 earthquakes. [Photo © Kyodo/Reuters via Flickr, Public domain.]

[13] Mohr Coulomb’s law: this mathematical law is used in geotechnics to describe in an approximate way the behaviour of most long-term soils subjected to shear stresses (known as shear failure). This law is characterized by two parameters: cohesion, which defines the shear strength of the soil under zero normal stress, and the internal friction angle, which corresponds to the angle naturally formed by a soil placed in a pile, with respect to the horizontal.

[19] Accelerogram: A signal giving the acceleration of the ground as a function of time is called an “accelerogram”.

To cite this article: BOURDEAU Céline (2023), Why do earthquakes trigger catastrophic landslides?, Encyclopedia of the Environment, [online ISSN 2555-0950] url : https://www.encyclopedie-environnement.org/en/soil/why-earthquakes-trigger-catastrophic-landslides/. 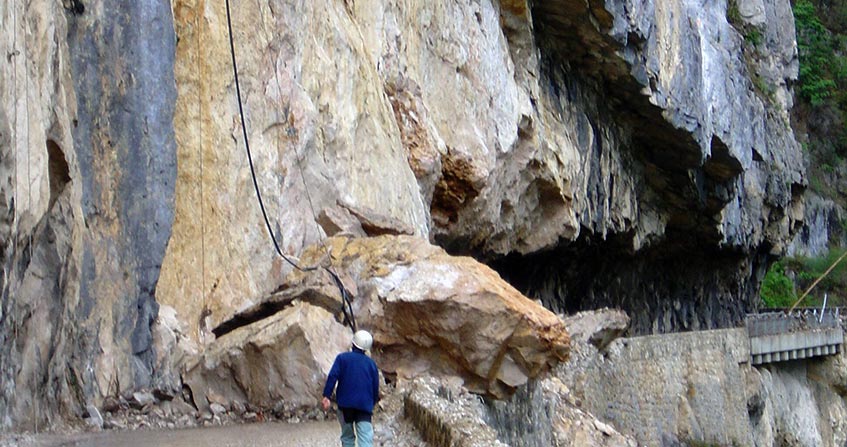 Due to their frequency and sometimes very large volumes in young mountain ranges (Himalayas, Andes,…