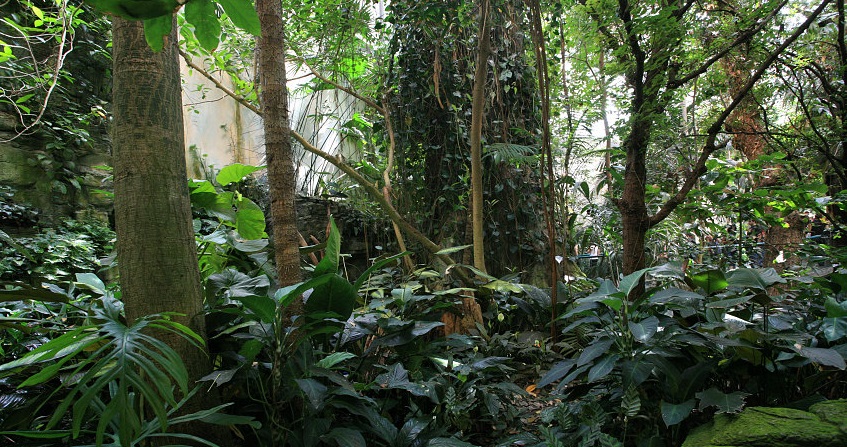 The meteorology of tropical regions, marked by trade winds and their effects, is particularly capricious. In the vicinity of the land or sea, the lightening of the overheated air in this region, which sees the Sun at its zenith, draws in trade winds from the north, east and south. These converge, rise in a strong updraft and generate the eastern equatorial current. At altitude, the upward movement diverges again, northward or southward, while bending eastward, before diving to the ground at latitudes of ±30°, forming Hadley’s cells. This convergence zone is subject to strong variations caused by the seasons, by the alternation between oceans and continents, as well as by the alternation between day and night. These disturbances lead to seasonal shifts from this convergence zone to the north and south, as well as a succession of warm and cold fronts that result in intense precipitation, often associated with severe storms.

Let us place ourselves in the equinox period. In the equatorial region that sees the Sun at its zenith, above the thick local forests, which absorb solar radiation well, the overheated air is strongly lightened and rises upwards in the troposphere (read The atmosphere and the Earth’s gaseous envelope). Sucked up by the depression resulting from this rise, the air from the north is carried towards the centre of this region and the Coriolis force [1] curves its trajectory to the right, therefore towards the west. Similarly, the air from the south is oriented towards the lift zone and the Coriolis force curves its trajectory to the left, thus still to the west (Figure 1). As for the air coming from the east, already overheated, lifted and set in motion westward during the previous hours, when it saw the Sun at its zenith, it also participates in this easterly wind. This lifting and suction therefore affects all the air masses around the best heated region, which is very large since the diameter of the circle that receives 90% of the solar radiation is close to 5000 km. This overheated region follows the apparent motion of the Sun and thus moves westward with a speed over the ground of about 1600 km/h (one round of the equatorial circle, or 40,000 km, in 24 hours). As a result, the air located at the west is absorbed into the general lift before it can move. It should be noted that no matter at all moves at the very high speed of 1600 km/h, which only represents the displacement of the Sun relative to a fixed observer on the ground.

Controlled by the position of the Sun, the trade winds convergence zone shifts northwards during the summer, to the Tropic of Cancer located at a latitude of +23°26′. And during winter, this area undergoes the symmetrical movement towards the Tropic of Capricorn to the south (-23°26′). The Coriolis force, on the other hand, remains to the right in the northern hemisphere and to the left in the southern hemisphere. Since the convergence zone moves towards one of the tropics, the symmetry of the convergence zone with respect to the equator, present during the equinoxes, gradually weakens during spring and autumn and disappears during the solstices. As shown in Figure 2, the wind components along the parallels then become partially antagonistic. As a result, the velocity of the equatorial east current is much lower during solstices than during equinoxes.

The rise of trade winds is necessarily accompanied by heavy rains, caused by the condensation of water in the air that has become wet as it passes over the oceans. Moreover, this intertropical region is particularly well lit and heated by sunlight, so that photosynthesis (link to  “Photosynthesis”) is very active there. This is why the intertropical region is covered with lush vegetation and thick forests.

2. The trade winds country, an area of great instability

In summer, the northward movement of the convergence zone is more important on the continents (North America, North Africa and Asia) because they experience higher temperatures than the oceans (Figure 3). For the same reason, in winter its southward movement is amplified over South America, sub-Saharan Africa and towards Australia. This gives rise to the sinusoidal gait of the equatorial eastern current shown in Figure 3 (red and blue zones respectively). This temperature difference between continents and oceans is due to two main mechanisms. The first is that they do not absorb sunlight in the same way. The oceans reflect a very large fraction of the incident solar radiation into the atmosphere: from 40% to 60%. In doing so, they participate greatly in albedo [2], i.e. in the reflection towards space of a fraction, globally of the order of 30%, of the solar radiation that reaches the terrestrial globe. On the other hand, the lands of green tropical regions participate much less in albedo: between 10% and 20% for forests. By way of comparison, it should be noted that desert sands reflect between 30% and 50% of the Sun’s rays.

The second mechanism that explains the temperature difference between oceans and continents is due to the good mixing of surface waters in the former. Their overall motion in the large thermohaline circulation, their periodic motions with the tides and the very random agitation due to swell and turbulence result in a tendency to homogenize their temperature by transporting much of the stored heat to areas further north or south. On the contrary, on the continents, only air can provide such convective heat transport (i.e. by transporting heat with this gaseous material). But its efficiency is considerably lower, because air is about 800 times lighter than seawater and its calorific capacity is 4 times lower. Everyone can check this property in their kitchen by trying to cool a dish that is too warm by watering it or blowing on it. On the other hand, winds are the effective agents for transporting water in the air, either as invisible vapour or in the form of mist and clouds. It is evaporation over the oceans that brings moisture into the air, to the point of saturation. This water load in the form of steam is no longer tolerable during a drop in pressure or cooling. Then condensation, i.e. a change from the vapour form to the liquid form, leads to the formation of fogs, clouds and, possibly, precipitation and storms.

The formation of unstable and highly intermittent convective cells is one of the specific characteristics of the intertropical convergence zone [3], often referred to as ITCZ (Inter Tropical Convergence Zone). It is the result of a combination of several mechanisms. First, the presence of air heated from the ground, under colder and heavier masses brought by the trade winds, constitutes an unstable configuration. This results in a structured convection in cells with very variable horizontal dimensions and a maximum altitude that can reach the troposphere boundary. This organization leads to a succession of warm and cold fronts. Cold fronts are the boundaries of the coldest and heaviest air masses, which force warmer and lighter air masses to pass over them. This lifting is systematically accompanied by cooling and expansion. The result is a rapid condensation, which leads to the formation of very characteristic clouds, the cumulonimbus clouds recognizable by their anvil top, as well as sometimes very heavy rains, accompanied by violent storms such as the one that caused the tragic accident of the Rio-Paris flight on June1, 2009 (read Thunderstorms: electricity in the air).

The violence of these convective instabilities is often due to other mechanisms, the effects of which are additional to those described in the previous paragraph and contribute to giving the weather of tropical regions its particular characteristics. First, the equatorial depression of the convergence zone is controlled by the apparent movement of the Sun. This adds to its seasonal movements and convective instabilities a daytime oscillation with a maximum low pressure around noon and a minimum at night. In addition, the southern hemisphere, which carries the enormous mass of glaciers on the Antarctic continent, is colder than the northern hemisphere, which carries a large area of land that absorbs solar radiation well. Finally, the temperate regions to the north and south of the convergence zone carry very calm belts of high pressure, separated by depressions. These depressionss, where the air rotates in the cyclonic direction (counter-clockwise as the Earth’s rotation around its axis) due to the Coriolis force, are extended by long spiral arms, some of which can reach tropical regions. In both hemispheres, cold air masses from temperate latitudes may then pass between high pressure systems and end up in tropical regions, where they reinforce cold fronts and warm air uplift. Their influence is characterized by the north-south orientation of grain lines, along which heavy and well localized showers develop (Figure 4).

In conclusion, the inter-tropical convergence zone (ITCZ) generated by the trade winds exhibits very specific characteristics. It can be considered as the main trigger for atmospheric circulation, first in Hadley’s cell and then throughout the troposphere (read Atmospheric circulation: its organization). It is marked by the violence of tropical storms (read Thunderstorms: electricity in the air) which gave rise to the French expression “pot-au-noir”, introduced by the 19th century sailing navy to designate this dangerous area. This expression is still used today by crews of transatlantic flights from one hemisphere to another, and by tall ships engaged in round-the-world races.

To cite this article: MOREAU René (2023), The key role of the trade winds, Encyclopedia of the Environment, [online ISSN 2555-0950] url : https://www.encyclopedie-environnement.org/en/air-en/key-role-of-the-trade-winds/.

Pressure, temperature and heat are quantities used in everyday life, especially in meteorology. Their physical…