Home » Water » Streams and rivers » How to reconcile dams and sediment transport? 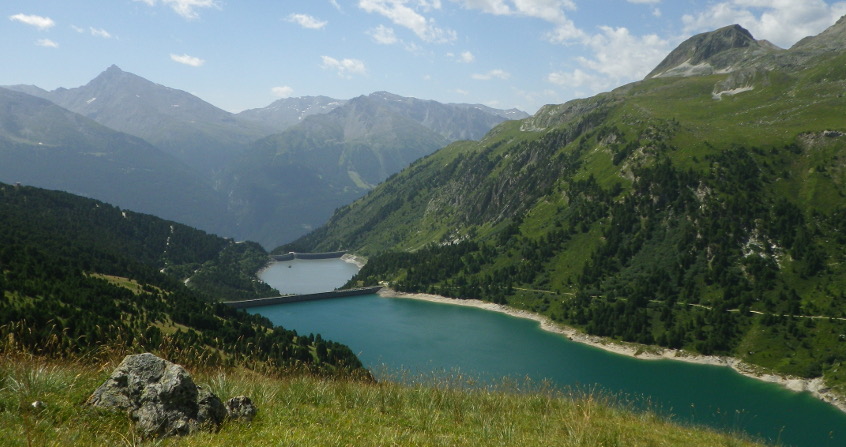 True technical feats, dams have a variety of functions. Thanks to hydroelectricity, they are at the forefront of our renewable energy resources. Their reservoirs allow flood control, support for low water levels, irrigation and the development of recreational facilities. But through sediment capture, they can significantly alter the watercourse regime, the fertility of downstream soils and associated ecosystems, and ultimately the shape of our coasts. What are the main challenges facing their designers to limit these effects?

1. Location and usefulness of dams

1.1. Dams on a global scale: some figures

In France, 569 large dams are listed5. They represent 13% of the obstacles identified on national watercourses compared to 57% of river thresholds [6] (Figure 1).

The distribution of these structures is very uneven across the French territory; it can be noted that the upstream part of the Loire basin, the Dordogne, the Rhône and the alpine reliefs are among the most developed.

There are several types of dam constructions:

The nature of the substratum, the topography, the inputs (solid load) of the catchment area, the hydrological regime of the river and the morphological configuration of the developed valley are the main parameters determining the type of dam to be built. Their specificity will determine the uses and management.

Built in 1675 to supply the Canal du midi [9], the 30 m high Saint-Ferréol dam was the first major French dam. Such structures have been built for various purposes:

Almost half of the dams have a single purpose. The others have a more or less versatile use. Thus, some dams nowadays often have a recreational purpose (recreational bases) (Figure 4).

2. How do dams affect sediment continuity?

The processes that cause sediments and their fate are erosion, transport, deposition and compaction. The installation of dams on rivers is always accompanied by hydromorphological and physico-chemical modifications, disrupting in particular sedimentary but also ecological continuity. These structures will modify the hydrological regime of the rivers concerned, moving from fluvial dynamic regimes (with current-related turbulence) to static regimes close to lake domains (calmer regimes, less turbulence). This regime modification allows the privileged accumulation of fine particles near the dam while the coarser ones will be more abundant at the tail end of the dam (Figure 5).

Dams can disrupt sediment flow from upstream to downstream of a watercourse over long distances, sometimes to the estuary. They are physical barriers that represent effective sediment traps. It is estimated that 70 to 90% of the volume of sediments exported from the catchment area [10] [11] is retained, with the result that the sediments are sorted into granulometric sizes. For example, coarse pebbles or sand will accumulate in the reservoirs. This will have downstream impacts on the habitats of impoverished aquatic and riparian ecosystems (on the banks), but also promote the sinking (or incision) of a river bed over time.

On the other hand, the loss of fine sediments also trapped within dam reservoirs will have negative effects, for example on the downstream transport of nutrients. It can also reduce turbidity in watercourses, which is essential for some fish species to hide from predators. They no longer allow floods to bring fertile silts to agricultural soils downstream (e.g. the Aswan Dam on the Nile in Egypt [12]).

However, the percentage of sediment trapped will depend on the residence time of the water body in the dam. Dam reservoirs are thus fed by the erosion products of the watersheds in which they are built. This sedimentary material can supply dam reservoirs to a greater or lesser extent depending on the lithology (the geological nature of the rocks). It is clear that the material mobilized will not be in the same form or quantity depending on whether one considers a carbonate watershed or a watershed dominated by crystalline rocks such as granites. Similarly, the development of the watershed will play a fundamental role in the nature and abundance of sediments. Indeed, the material contribution resulting from the erosion of geological formations depends on the predominance of forests, agriculture, industrial activities and urbanization.

However, not all dams have the same impact on watercourses. This depends in particular on the height of the structure, its location – more or less upstream of the catchment area, the existence of successive dams on the same watercourse. In absolute terms, the establishment of dams has the effect of increasing the erosion of the upstream areas of the catchment basins and thus increasing their sediment load [13]. This is due in particular to changes in the hydrological functioning of the river. However, what we are seeing is a reduction in the amount of sediment downstream, due to its retention within the reservoirs.

However, this solid load is absolutely necessary in watercourses downstream of structures to maintain their morphological and ecological characteristics. In general, the establishment of dams is therefore inexorably accompanied by a change in the morphology of river banks, deltas, estuaries and coasts due to the impoverishment of sedimentary material. The result is ultimately greater coastal erosion.

3. What to do with the sedimentary material accumulated over time?

The management of dam impoundments does not only concern the structure itself. Indeed, the management of sedimentary material, which is stored or which can transit within and through the structure, is a fundamental issue. Nevertheless, during design, the life of a dam is estimated from the sedimentation rates and volume of an optimal basin. However, the size of the structures is often underestimated in relation to a realistic lifespan. The accumulation of sedimentary material can therefore have a long-term impact:

The amount of material accumulated can reach several thousands m3 with often much higher sedimentation rates than in natural lake regimes of identical size.

Sediment stock management is generally carried out by punctual and more or less total evacuation, due to the costs or environmental impacts associated with these practices. Management can therefore be achieved through different approaches:

To address these problems, solutions are being implemented or considered for (future) construction. Among these, the choice of the location of a dam itself is essential. It must be built more or less upstream of the catchment area, taking into account the erosion propensity of the chosen site, the solid load involved, the hydromorphological characteristics of the river to be developed… Other solutions can also be considered such as the installation of bypass systems or turbines accepting the passage of more or less fine sediments.

Sediment filling of the reservoir over time therefore requires special management, which can be problematic depending on the quality of the sediment. Indeed, since the dam has played a role in hyperaccumulating contamination, large volumes of highly contaminated sediments cannot be discharged by flushing into the natural environment under penalty of pollution downstream of the watercourse.

4. Risks related to the massive release of polluted sediments

The presence of dams on watercourses will also modify the geochemical cycles of major elements (Si, Fe…), trace elements and/or contaminants (As, Cd…) as well as particulate nutrients (organic matter, phosphorus, nitrogen…). Indeed, these elements are trapped or associated with the sedimentary matrix. Due to the physico-chemical changes they cause in the water column and in the sediments, dams can then promote the remobilization of these sediments (Figure 6). In addition, sediment quality is a major issue in the management of the accumulated sediment stock. On it will depend the method that can be considered to manage the sediments and even restore sediment continuity without risk to aquatic life downstream of the dam (see section 3).

Naturally, the geochemical bottom of a watershed in which a dam is located may be higher than national averages (e.g. presence of mineralized veins). This disturbance, natural or otherwise, of sediment quality mainly concerns inorganic contaminants. These elements are usually metals or metalloids usually present in low concentrations (or traces). They can be potentially toxic to the environment depending on the form (speciation and mineralogy) in which they are present. These are most often the following elements: As, Cd, Cr, Cu, Hg, Ni, Pb, Sb and Zn.

Their presence in exceptional concentrations is most often associated with human activities at the watershed level. Thus, mining activities exploiting these elements will affect the quality of sediments in nearby watercourses (as observed in the Villerest dam, Loire basin in its upstream part [14]). Indeed, the exploitation of this natural resource will make some elements that have been stable within the rocks more accessible/mobile. Disruptions related to excavation and crushing (reduction in particle size) of the extracted rocks will modify the physico-chemical parameters of the environment and promote oxidation and hydrolysis reactions of the mineral phases, for the main ones. These elements are then “redistributed” within the sediments and feed the reservoir of a possible dam. The sediments then contain elements in more mobile and reactive forms than they were at the beginning.

This contamination can also be of an organic nature: we speak of persistent organic pollutants (POPs). Their origin can be natural (forest fires, volcanic eruptions…) or anthropogenic. Discharges from certain industrial processes or from agricultural activity – PAHs (polycyclic aromatic hydrocarbons), PCBs (polychlorinated biphenyls), pesticides (organochlorines) – have a significant impact on sediments. For example, 20 reservoirs in the Italian Central Alps have shown PCB contamination [15]. Domestic effluents, as well as agricultural activities, are also responsible for the release of phosphorus (P), a factor that favours the eutrophication of dam reservoirs. In summer, this phenomenon can lead to excessive blooms of cyanobacteria producing toxins (cyanotoxins). The reservoirs are then unsuitable for swimming (read Phosphorus and Eutrophication)

The management of contaminated sediment stocks is delicate or even impossible within dam reservoirs. This can lead to the stopping of the dam’s activity, or even its destruction, allowing the watercourse to recover its original functioning (also called erasure). Nevertheless, the attractive scenarios of dam removal to restore sedimentary and ecological continuity of a watercourse seem difficult to achieve in the case of large dams. Such a synopsis does not, however, prevent us from having to deal, at some point, with the management of sediments -contaminated or not- accumulated over the years.

[6] Fixed or movable structures that block only the minor bed of the river – partially or totally – in contrast to the dam that blocks more than the minor bed.

[7] The degree of regulation makes it possible to account for changes that may affect the regime of a watercourse (e.g., flow), particularly its residence time. A high degree of regulation indicates a high probability that a significant volume of water will be temporarily stored in a given year and then released. Temporal storage and later release of water bodies will alter the natural regime of the river and, due to the stagnation and stratification of water bodies within the reservoir, affect other parameters such as temperature, dissolved oxygen concentration or solid load (suspended solids). Thus, reservoirs that have storage capacities for water bodies of several years and whose operation is governed solely by water demand (e.g., low water level rise, flood regulation) have regulation degrees >100%.

To cite this article: COURTIN-NOMADE Alexandra (2023), How to reconcile dams and sediment transport?, Encyclopedia of the Environment, [online ISSN 2555-0950] url : https://www.encyclopedie-environnement.org/en/water/how-reconcile-dams-sediment-transport/.

Check dams on torrents, why?

In the headwaters of the Alps, the Pyrenees and the Massif Central, mountain torrents are… 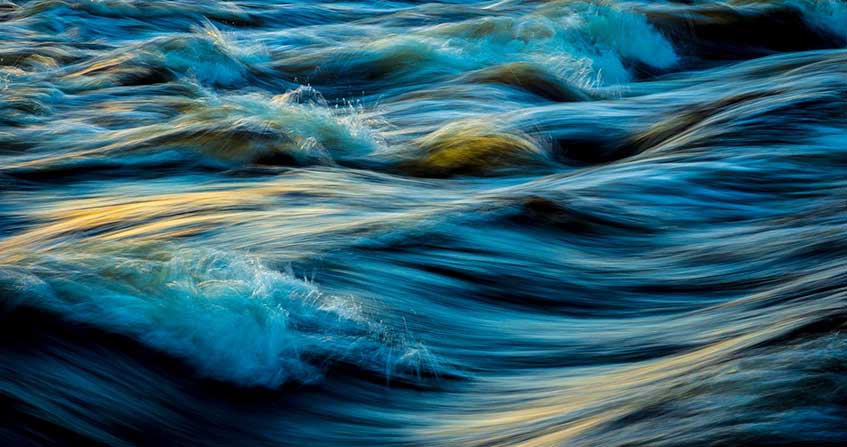 Hydrometry: measuring the flow rate of a river, why and how?

Predicting and managing river flows is a necessity for flood control, water supply, agriculture and… 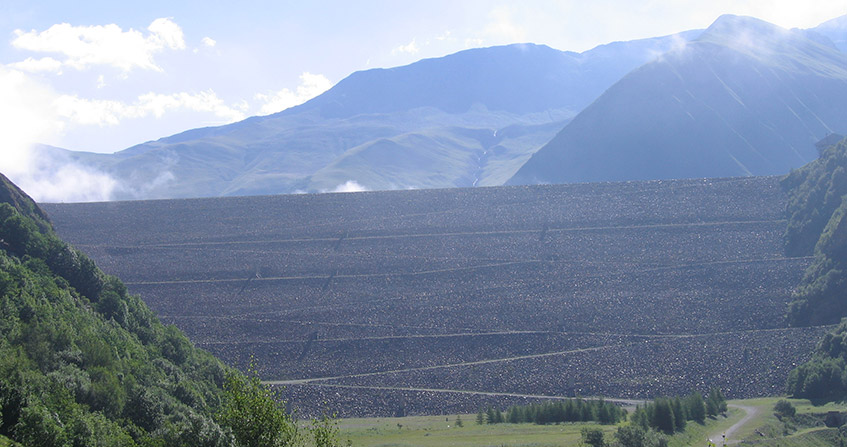