| Focus 1/1 | The dangerous liaisons of oxygen and life

In its most stable state, oxygen exists in the form of dioxygen, O2. What causes its possible toxicity is that this molecule can evolve into much more dangerous species: reactive oxygen species (ROS). 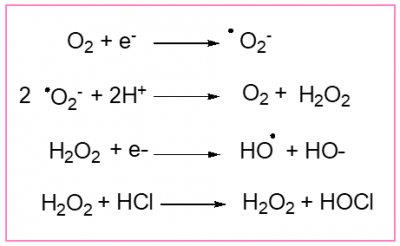 Hydroxyl radicals react with many biological molecules. For example, they break down DNA strands and thus genetic information. They can also attack fatty acids to give new radicals, alkyl radicals, which will cause significant damage to cell membranes.

It’s these species .O2–, H2O2, HO. and a few others like the hypochlorous acid HOCl, much more than O2 itself (except in its triplet state which we have already mentioned), which made the period of the great oxidation so perilous for the bacteria and archaea of that time. They had to adapt and evolve (See The dangerous liaisons of oxygen and life). It is possible that it was this evolution that led to the formation of the first eukaryotic cells from modified archaea.

Articles from the Encyclopedia of the Environment describing the involvement of reactive oxygen species in the responses of living organisms to various environmental stresses: